What are the crossroad moments you can see reflected in your life?  At the end of the movie, “Castaway” with Tom Hanks, the producer Robert Zemekis, makes literally clear the crossroad Hanks faces as the main character. Hanks has been rescued at sea after surviving three years on a deserted island from a plane crash.  His “coming back to life” is not as he dreamed, given the people he loved and life and the world have all moved on believing he had perished.  He realizes he can’t go back to what was, so the scene has him in his vehicle, filmed from above at a literal crossroads.  The kind you find in western Kansas where the roads are in squares of 1 mile each side, and at each intersection, you have the option of starkly clear 90 degree turns or a straight line forward or back.

What have been your crossroads?  We considered snapshots of Hagar’s life in Genesis last week.  And while her servant status did not come with many if any choices, the two times she was in the desert, the first on her own, the second with her son Ishmael, she had the choice to be in relationship and respond to God, or not.

The first time she had run away in relation to the horrible treatment she was experiencing.  In that moment God hears and sees her and sends her back to the same community promising to be with her.  She names God in the moment, “El-roi” the God of seeing or the God who sees. “Have I really seen God and remained alive after seeing him?” (Gen. 16:13).

It makes a difference, doesn’t it, in those crossroad moments, if we trust the “God who sees”?  I think very rarely does that trust communicate as directly as literally telling us exactly which way to turn.  I do however believe that trusting we are seen by the God who loves, gives us the confidence to make that decision in the nudging or urging guidance of the sacred direction we may finally choose to take.

We see Hagar again after her son is born being sent out into the desert by Abraham and Sarai to make her way with her son on their own – living or dying they have no network of communal support in this chapter.  Once again God comes to her upon hearing the cries of the boy whom she has placed under a bush after the food and water have run out so as not to have to watch him die.  An angel of God comes to her, tells her not to be afraid and that God will fulfill God’s promise of her son being the source of a great nation.  “Then God opened her eyes and she saw a well of water.  She went, and filled the skin with water, and gave the boy a drink.  God was with the boy . . .” (Gen 1:19-20a).

She first names God, “El-roi,” the God who sees, and in this moment God opens HER eyes to see the way of life, or perhaps better said, the water of life, literally and spiritually, and she and her son live.  This time God does not call her back toward her former community, but forward toward a community God promises and envisions.  The scripture tells us “God was with the boy,” and he grows up in the wilderness and that Hagar finds a wife for him from the land of Egypt.

Two different crossroads, two different directions, both times God sees, hears, and I believe urges and nudges her toward that which is life-giving for her and for her child.  I believe it to be such a wonderfully complex and illustrative story of so much of whom God is and what our faith is about.  Hagar is not part of what at that time is known as “the chosen” community carrying God’s covenant.  God shows clearly that being in relationship with “outsiders” is foundational to whom God is.  While externally we might think the world would have been far less complicated had God simply not seen, heard, or attended to Hagar, that’s clearly not the way God sees and lives in relationship with us, all of us, in every place and time. 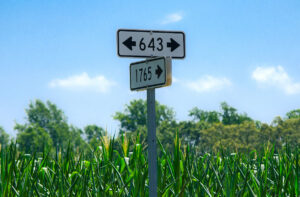 Like you, I have experienced multiple crossroads in my life.  They rarely have been as clear as sitting at the intersection of four different roads, as Tom Hanks in Castaway, and literally deciding to turn one direction or another.  But they have been crossroads nonetheless.  In reflection I can see and hear the influences of other people, of the situation at the time, of how my own history and experiences have influenced a particular path that I chose, or that sometimes I think may have chosen me.  Do I see the hand of God?  The nudging and urging, the inviting and cajoling, the loving and forgiving toward what the vision ahead held? Absolutely, well, mostly, sort of, yes without question, well, maybe with a few questions, or probably a lot of questions and a doubt or two or a hundred, but yes absolutely, well, mostly. *smile

Sound familiar?  This pastor is awfully human, I’m guessing not many of you are disillusioned by that!  I don’t think I have ever had a stronger faith AND I yet still wonder and wander around in my spirit when facing crossroads and multiple paths toward a bit of an unknown journey.  Maybe you too?

I’ll never forget teaching this poem in the spring of the year of teaching when I resigned and after which I entered seminary the following fall.  I’m guessing you will recognize it.  After so many years it rings true for me even today.  May it bring a minute, or maybe two, of grace.

The Road Not Taken

And sorry I could not travel both

And be one traveler, long I stood

And looked down one as far as I could

To where it bent in the undergrowth;

Then took the other, as just as fair,

And having perhaps the better claim,

Because it was grassy and wanted wear;

Though as for that the passing there

Had worn them really about the same,

And both that morning equally lay

In leaves no step had trodden black.

Oh, I kept the first for another day!

Yet knowing how way leads on to way,

I doubted if I should ever come back.

I shall be telling this with a sigh

Two roads diverged in a wood, and I –

I took the one less traveled by,

And that has made all the difference.