I wonder if oatmeal raisin cookies count like having oatmeal for breakfast with raisins on top? Asking for a friend.

I found myself racing across Kansas last Sunday right after church. As you do when you’re bent on making a surprise Father’s Day visit! Maybe not exactly racing, the highway patrol had evidently been alerted as I started seeing them intermittently west of Lawrence so kept the big truck with the two new racing engines, o.k. two new batteries under the hood, at a relatively close to the speed limit pace.  Diesel was not less expensive the further west I got, but it’s certainly a conversation starter when I stop for fuel.  If there’s another truck getting diesel, I usually get a smile and some conversation about how big my truck is, the kind of tires I have on it, and if I enjoy driving it.  I have been known to say that it’s really the only kind of a vehicle for a pastor out rounding up souls for Jesus.  Sometimes that stops the conversation, sometimes it moves it into really interesting places.  I have had scripture quoted at me which is always fun, well, maybe not fun but usually at least interesting which passages are chosen.

You know when Saul who became Paul had his conversion experience, he was also on the road, a journey toward Damascus carrying letters from the high Priest allowing him to bring “followers of the Way (of Jesus) bound to Jerusalem.”  Right there in the middle of the journey a “light from heaven flashed around him.” (Acts 9:1-9)  I wonder if his throat fell to his stomach like ours do when we see those lights from the highway patrol flashing behind us, or so I’ve heard. snort  And then a voice, “Saul, Saul, why do you persecute me?”  Why indeed?  Such an interesting question that doesn’t necessarily need to stay locked in the annals of biblical history.  That persecution was around the way of Jesus not “fitting in” with the religious or political systems of the day.  And we may think, whew, glad we were not a part of that, you know, using our religion to exclude others that we don’t believe are as worthy as we are because they’re different.  Hmmmm.  Could the Methodist denomination be in the midst of a split over that very issue, even right now in the 21st century? Long past 50 or 60 AD in the beginning of the Christian Era when Saul/Paul is blinded by God’s light in his heart of exclusion.

I wonder sometimes if we are more interested in the definition of the rules we make to live within the bounds of a religious system than we are passionate about living like Jesus.  ‘Member him???  He was the one who walked directly toward the lepers whom no one else would touch. (Matthew 8:1-4) Do you know that in the beginning of cancer diagnoses people were afraid to visit or touch people with it because of the fear of catching it themselves?  HIV/AIDS was not the first “outcasting” disease.  We sorta forget that part of our history.

‘Member Jesus???  He was the one that healed the bent-over woman on the Sabbath, breaking the 4th Commandment, you know of those 10 commandments God gave Moses. (Exodus 20:1-17)  The one that says, “remember the sabbath and keep it holy.  Six days you shall labor and do all your work.  But the seventh you shall not do any work . . .”  He just went right up to that woman and worked on the Sabbath, just healed her right there on the steps of the synagogue on the Sabbath.  Broke the 10 commandments right then and right there in front of everyone.  She shouldn’t even have been at the synagogue in her condition.  Jesus didn’t let the threat of the rules of the day stop him from loving compassion.  We sorta forget that part of Jesus, the whole breaking the 10 commandments part. (Luke 13:10-17)

‘Member Jesus???  He was the one who stood in front of the religious authorities who wanted to stone to death, per the law, the woman caught in adultery – not sure where the man was in the story, but even I know she couldn’t have done this alone.  But it’s only the woman being stood up in public and exposed to ridicule and death per the rules of the day.  What does Jesus say?  “Let anyone among you who is without sin be the first to throw a stone at her.”  We sorta forget that part of Jesus, the whole mercy before judgment part. (John 8:1-12) 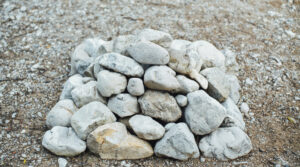 I wonder sometimes how big the stones are that we carry in our spiritual arsenals when we’re sure the way we do things is right and everyone else who is not the same is wrong.  And we point safely to the rules that we human beings have created to deflect responsibility for our own exclusive spirits and say we’re simply following what the people before us have said is the “right” way.

Juneteenth was Monday and celebrates the words of freedom finally reaching the southern part of Texas to let all persons of color know they were no longer under the law of slavery, the legal rules of being owned by other humans with less melanin in their skin.  Someone(s) somewhere(s) started questioning those rules and the veracity thereof.  The Methodist church was slower to respond in the living out of that freedom than the country.

Saul became Paul after that overwhelming and life-changing experience on the road to Damascus.  He starts preaching about Jesus to all the wrong people and there was a plot to kill him so his friends took him in the middle of the night and lowered him in a basket down the outside wall of the city so he could escape. (Acts 9:23-25)  And from there he simply kept traveling, kept talking to anyone who would listen, kept inviting people to community, to the table of Jesus, to re-membering him.

The passion and intensity is high with emotion in our denomination right now.  Churches are choosing to disaffiliate over who they want to exclude from community.  Those choosing to stay United Methodist do not have to vote to do that, we already are who we say we are as a denomination: “Open Hearts, Open Minds, Open Doors.”  At Grace most specifically:  “Loving God, Living Like Jesus, Serving the World.”

I love, love, love the following song.  My opinion that Erin Burke Foss sings it waaaaay better than this woman who wrote and recorded it, jes’ sayin’. Enjoy . . .