If we knew then what we know now . . . have you heard yourself say that?  Or maybe, youth is wasted on the young, sorta the same idea.  Or I’ve even heard an older parent wonder why it is when you have the time you always wanted to spend with your children, they’re gone raising their own kids – that somehow it seems backward, and maybe, they supposed, that’s what grandchildren are for.

It’s a never-ending search to figure out how best to use the time we have in each chapter of life.  I caught just a bit of the 60 Minutes segment on Sunday night in relation to what’s being called “The Great Resignation”.  I’m certain you’ve heard about it as well.  It seems the year of pandemic/shelter-at-home when we weren’t certain if there would be a vaccine or when the mass numbers of deaths would begin to lessen, jobs became scarce and/or numerous people quit by choice or by pressure because of the upending of infrastructure and schedules.

But now that we have progressed to a safer, albeit not ended, but a mostly safer place with the virus, great numbers of folks are not headed back to the same jobs as they’ve always had.  Initially the assessment was that the subsidies from the government that had been increased were enabling bad choices of not going back to work when people could.  But then the increased subsidies stopped, and many of the jobs remain unfilled. We all know this who are waiting longer for orders to be taken in restaurants, for prescription refills with some pharmacies having to close certain days, and the lack of enough trained substitutes for teachers, healthcare workers, and other professional service industries.

What’s happening?  Some tell us that families figured out how to make one salary work so the spouse could stay home to help children with on-line learning.  And that even as children have gone back in-person, that spouse has found employment they can engage in on social media platforms to replace income.  Others experience friends and former co-workers or employees re-evaluating their lives.  That a forced slow-down allowed an opening for reflection, some deeper thinking, and deciding that if life is as fragile as it feels, maybe a change in direction and work hours and workload is preferable even when causing a decrease in income and some lifestyle changes.  Then there’s those in healthcare work from M.D.’s and specialists through the chain to those preparing meals and cleaning rooms.  Not unlike educators these folks have experienced the rest of us cheering them as heroes, then vilifying them as glass-half-empty pessimists who make more money going out and finding covid even where covid isn’t to keep us scared and on the run so they can become wealthy from the government.  Yes, somehow we truly have reached that level of distrust of one another and of our systems.  In some cases a well-earned distrust, in others a paranoia even where it may not be credible.  And the unifying factor in all that is our humanness – our deep capacity to both accept and trust, and our deep capacity to doubt and reject.  All of which is required some of the time, and none of which is required all of the time.  I fear we have lost the capacity for anything less than the extremes in perspective across the board.  Frankly that worries me far more than any virus.  If we are unwilling to allow for healthy trust in partnership with a dose of distrust to keep things honest; if we are unwilling to allow for there to be good people in every profession in partnership with the knowing there are also a few who are incompetent and sometimes intentionally bad; then without that balance, we are defining a future leading to our own demise.

I believe we find what we’ve already decided is true, and that we see in people what we’ve already decided they are – even before they’ve shown us.  A sage piece of advice I learned many moons ago is that when people show you who they are, believe them. Yes AND, the key to that is to allow people the honest opportunity to show you who they are and not deciding who they are and then ignoring everything they show you, until they do the thing that proves you right.

There are days I want to simply throw my hands in the air and give in, give up, and give out.  What’s the deal, God?  I can’t be perfect in love, grace, and mercy; other human beings can’t be perfect in love, grace, and mercy, so how are we supposed to survive when these Covid 18+1 with additional variants, plus racial inequities, plus gender inequalities, plus economically widening gaps are occurring without limit?  What buttons can we push, what 1-2-3 steps can we take, what bury-our-head-in-the-sand actions can we take to find our way back to ignorant bliss???  Wait God, what?  You mean ignorant bliss ISN’T your strongest desire for your children???

Let’s see . . . “From that time on, Jesus began to show his disciples that he must go to Jerusalem and undergo great suffering at the hands of the elders and chief priests and scribes, and be killed, and on the third day be raised.  And Peter took him aside and began to rebuke him, saying, ‘God forbid it, Lord! This must never happen to you.’ But Jesus turned and said to Peter, ‘Get behind me, Satan! You are stumbling block to me; for you are setting your mind not on divine things but on human things.’” (Matt. 16:21-23, NRSV).  Jesus asked/invited/maybe sorta mandated a little/actually a lot, that the disciples deal with the reality of the way we and our world would deal with him and his “way” of eternal love, mercy, and grace. And a little reminder, we and our world don’t come out looking very good in the situation, and God loved us and loves us still.

God’s love for us and our world hasn’t changed, unfortunately our response as human beings toward God and one another hasn’t changed much either.  When we decide destroying those with whom we disagree verbally and emotionally, if not physically, is the best solution to avoid our own suffering . . . then maybe Jesus’ rebuke of Peter connects to us as well over 2,000+ years later.  And yet knowing the reality of Peter, Jesus yet calls him the rock on which the church will be built against which even the gates of hades would not prevail.  What a pie-in-the-sky optimist that Jesus . . . or maybe not?  I mean the church yet exists, even amid broken human beings leading it amid broken historical times. 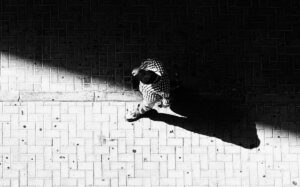 Finally that’s the only, and most likely way too simplistic for most, place I come to that keeps me from giving up, giving in, or giving out on this world or we, tendency-to-extreme-positions, human beings.  If God hasn’t given up on us from the beginning of the beginning, how arrogant am I to think our tiny chapter of history isn’t worth hope, and the more than a lifetime’s work of learning to live Jesus’ love, grace, and mercy?  Our time on this planet in this life is a gift, may we use it in wisdom and gentleness, and wherever possible trust more and doubt less, look for good more and expect the worse less.  And maybe each of our, minute-of-grace, lifetimes will end up being just enough.