Rollercoasters have never been a favorite pastime.  I have known people who have made travel plans, some even globally, for particular rollercoasters that are famous for one reason or another.  I’m thinking not so much.  I wouldn’t mind seeing an Alp, or the Great Wall, or de Nile, which is, in fact, also a river in Egypt.  But to roll on a coaster? Nope.  So as you can imagine, for those of us who do not hanker for the rollercoaster experience, the beginning of this year, or even the month of December, has not been our favorite.  Did you see that coming? 60 degrees, 12 degrees, 57 degrees, ice and snow and -3 on the first Sunday of the year, 46 today, 12 with windchills and snow on Thursday.  I know, I know, we live in the Midwest, but you have to admit this is odd even for the Midwest. 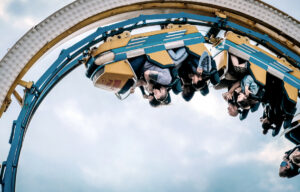 Reminds me back when I was 59 in 2020, imagining that life was going to get easier once we hit that New Year’s rockin’ eve.  2021 would be a moving out of pandemic and into a new era of post covid 18+1.  United Methodists would have that dreaded but anticipated General Conference where we could decide if we might amicably split, if we might move forward together but separately.  Yes, the essential truth of that statement is a bit symbolic of where we are as a people right now, don’t you think?  But it didn’t occur, was rescheduled for 2022 and most aren’t certain it will move forward this year either.  Maybe it’s the part of roller-coasting that I don’t like – the barrel roll upside down part and then what if the coasting stops in the middle of the barrel and some are left locked in but upside down for a length of time – ain’t nobody got time for that!  Yet it feels like where we are.  We know it won’t likely last forever, but what will it be like for as long as it does?

And guess what?  That’s at least partly our decision.  We can decide how we live in this continuing oddity of time with pandemic variants, and the unknown future of our denomination.  We can decide if we want to continue to be angry about masking and/or non-masking; and we can decide if we want to treat the “other side” of the theological perspectives around inclusion as if “they” are enemies . . . OR, we can stay peacefully strong in our own perspectives on these and other challenging issues and seek relationship in the midst of difference.

Homiletics professor Karoline Lewis says, “This time, this place on the journey, this chapter in history, where we find ourselves as individuals, communities, a nation, a world, and a church – is much more than unprecedented.  It’s unnerving, unsettling, upending, and upheaving – a suspension of what we know and not yet settled into what will be.  An in-between caused by pandemic and protest, by disbelief and dystopia, by resistance and revolution.”

I don’t particularly like that statement, it does not aid my desire for comfort and stability and a longed-for assurance that everything is going to be alright and we’re all going to end up as friends.  Rose-colored glasses anyone? However it does seem to capture, in succinct and rather terse terms, the reality of where and who we are as human beings.  AND it also gives rise to the strength in faith we have to choose in HOW we want to live during these “unnerving, unsettling, upending, and upheaving” times.  Lewis goes on to talk about how essentially, Mary and Joseph live in that suspension of time between “what they know and what will be,” their entire lives with Jesus.  That as they parent, and watch and witness, his life will become more than they ever could have imagined, give rise to both adoration and animosity, and finally will come to a horrific end that is actually resurrection for a new beginning.  And while we might say they should-a known because at least they had the benefit of those angels and prophets, maybe their faith choices weren’t actually any easier than ours in how to be and do and relate in the complexity of everyday life.

One of the things I said Christmas Eve was that I don’t believe Mary and Joseph would have traded being the parents of Jesus for anything, even knowing the pain and heartbreak they had to experience at the end of his life.  I’m guessing most of you might say the same thing about some of the sacrifices and struggles you have had because of the love that was at the foundation.  I found myself saying in my pastor’s report at our annual all church conference that, “being a pastoral leader has never been more complex or difficult my entire professional career, nor has it been so deeply authentic, starkly real, or faith-led to a point of growth and utter amazement.  As odd as this may sound, I never would have chosen to lead a church in the time of a pandemic AND I would never have chosen not to have the opportunity to be leading this church in this exact place and this exact time.”

What a paradoxical time to be alive – maybe that’s always been the case for human beings, and it’s simply magnified by what we’re currently experiencing.  Here’s what I know, I challenged us to pray both the Covenant Prayer in the Wesleyan Tradition (Sunday nights) and the Prayer of St. Francis of Assisi (Monday mornings) for the entire year of 2022.  I flat out don’t know if that will change the world, I have full-on faith it will change each one of us.  And maybe that in itself, is a minute of God’s grace as we roller-coast right into the beginning of 2022.