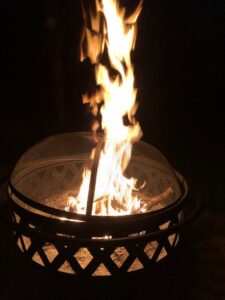 I decided last night was the perfect night for a fire in the old firepit.  Maybe the flames burned a little higher than what I sorta planned, but go big or go home, right?  I like it better without the screen dome on the top but sparks were flying and I decided sometimes using something the way the instructions say may be the better part of valor.  It’s taken me nearly 6 decades to learn that.  I’d like to blame that on parentage, or certainly sibling influence, or the groups of friends I’ve hung around with over the years, but alas, I think I’m on my own with this one.  You know when it says “dry clean only”?  Yeah, that’s really not just a suggestion . . . no matter how many times you decide to test the seriousness of it.

It’s been a gorgeous series of days in this midwestern start to November.  We have several burning bushes in our neighborhood that are flaming red along with some red maples, yellow birch, and a bunch of other deciduous trees that make my heart happy to see, against the backdrop of houses with Christmas lights lining the eaves and peaks outlining their elevation.  I’m o.k. with it fitting together somehow.  Maybe because it’s not all the houses, and maybe because the weather is still a little nice, and maybe because it’s a season for gratitude so I’m feeling a little mushy inside.  Even Kyle burning some kind of pumpkin spice-ish scent in the office isn’t sending me too far over the edge of hallmark holiday bah-humbugging.  And true confessions, I have watched my first Hallmark channel Christmas movie.  You know the one where the big-time corporate mogul buys the small village family owned Inn and then comes to visit to finish the deal and meets the daughter?  And then his single parent son who he’s brought with him falls in love with the family’s cute dog and then with the daughter and tells the Dad as they are leaving town with everyone bereft that the Dad is essentially dumber than a bag of bricks so they turn around and win the daughter back and promise to leave the hotel just as it is and the parents will get the money but the daughter can keep running the hotel and they’ll live there happily ever after forever?  Yeah that one.

And why did I watch it?  For the same reason pumpkin spice happens every year and Christmas lights and turkeys and cranberry sauce and the Macy’s parade . . . in a world of chaos and inconsistency, sometimes you simply want to lose yourself in something where you know what the ending will be.  Though I will admit while watching I was also reading my latest Runner’s magazine, doing laundry, and letting the dog in, letting the dog out, letting the dog in, letting the dog out – and I don’t feel like I missed the plotline too much.  It’s really never so much about the plotline, but about the happy ending.  Sometimes even grizzled old pastors simply want a cinematically simple happy ending.

I’m trying to let that roll around in my being after reading quite a bit around how churches and preachers need to relax the need to prophetically challenge their congregations right now and instead offer places of comfort and safety and unconditional support, that finally that is how to get people to come back to in-person worship. What I keep wondering is if those things are really that mutually exclusive.  I sorta think I know that if I didn’t intermittently and regularly offer this congregation I serve challenges to expand our thinking, engage ourselves in actions ignited by our faith, and even question the divisions we decide we have, whether from the right or from the left, because of politics, or economics, or religion – if I stopped doing those things I’m not certain folks here would believe I still cared – for God’s message or for us as a community of faith.

Is it as easy as a Hallmark Christmas movie formula?  Nope, not even.  Frankly deciding to build a community of faith together that has persons from every perspective engaged and holding boundaries of respect and dignity and welcome for all people whether we agree or not, again from the right side or the left, is messy and complicated.  And it doesn’t always work.  And we are missing populations of people that we have yet to figure out how to make welcome and that hurts the heart of an old pastor.  Annnnd, we haven’t given up on the vision of living like Jesus.  Not just believing him with the right words, but seeking to actually live like him . . . what pastor types call committed discipleship.

I won’t compromise or be moderate with hate or violence either physically, spiritually, or verbally.  I will offer space for growth, broadening perspective, and learning by everyone regardless of perspective, with and alongside one another.

Many of us signed a letter sent to the Council of Bishops that was meeting this past week inviting and asking them to give leadership in helping us move past this state of suspended animation that we are keeping as a denomination. General Conference may not now happen in 2022 because of differing access and policies for Covid vaccinations around the world.  See the link below.  The letter simply asks that our Bishops help us find a way to move forward and for those of us choosing to stay United Methodist, to remove the divisive language around sexuality, and understand that the scope of ministry reaches into and far beyond a single issue.  Understanding that it does NOT mean anyone will be forced to do that which is against their matter of conscience and at the same time moving toward an understanding of God’s justice and inclusion for all.  Some, again from both the right and the left, would tell me and us that both of those at the same time are impossible.  My answer?  Right, except for the grace of God.

When Mary the mother of Jesus asks the angel how it can be that she will be with child, whose birth we are about to celebrate, the angel says about both she and her cousin Elizabeth who is with child in her old age, “For nothing will be impossible with God” (Luke 1:37, NRSV) maybe my favorite and one of the most important verses of scripture we have for this cynical world of ours right now?

I built a fire whose condition “helped” me acknowledge that I sometimes need to follow directions and limitations as given.  And I love seeing Christmas lights and autumn leaves together, all before Thanksgiving has even happened. Sometimes I simply want simple movie endings, and sometimes I’m ready to take on living in a complex and messy society and trying to find connections between divisions without losing integrity.  In the center of it all, I pray, God’s grace.

A CALL TO GRACE (google.com)