There is not a humming bird feeder anywhere close to where I live.  No red sugar water in any clear plastic oddly shaped container hanging from any poles.  I’m not opposed to feeding hummingbirds, I’ve simply never thought about it.  In the last couple of weeks, a hummingbird, I’m not sure if it’s the same one or not, but a hummingbird has appeared when we’ve been out sitting on the deck.  My sister and folks have been here, and from as far back as I can remember, birds have not been my sister’s favorite thing.  We used to go out and collect eggs in the chicken house and she says it probably started then.  Hens are not always really excited for you to take the eggs they have laid.  So they talk a LOT and really loudly while you’re collecting, and they sorta fly and jump around and it’s a rather chaotic experience.

So we were eating out on our deck one evening and the hummingbird appeared and sister was the first one to see it, of course, and it seemed to whir around her more than the rest of us.  Animals seem to know when there’s a person who is uncomfortable with their presence, and they want to be all the closer, some humans are that way too, because it’s a little fun maybe, so I’ve heard. 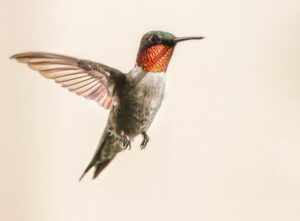 There was a hummingbird experience in Colorado for vacationers, one of whom was me, about a month ago as well.  Early in the morning the hummingbirds would show up to the plastic red sugar water feeders hanging on the deck where we were staying.  It’s fascinating to watch how fast their wings go.  One morning one of them flew smack dab into the window and fell to the ground without moving.  I was not present for the big accident, but my friendly co-vacationer was and picked the little bird up and realized it was still breathing.  She decided to hold it while it most likely was going to expire.  But then it didn’t.  So when I came out, while it wasn’t conscious, we decided we should do something.  Full disclosure and being from a farm, I initially suggested we find a soft spot in the grass and let nature take its course.  That was a hard no. I called the nearest wildlife rescue place and they said they would be happy to help.  I named the unconscious whirly-bird “Pete”.  I know a Pete who is near and dear to my heart and is tough as nails, so I decided it would be good for him to be named Pete.

We wrapped Pete up, put him in a box with the lid open and drove 2 hours, yes, 2 hours to the wildlife rescue.  It was Colorado, so the scenery was pretty on the way.  About 30 mins. from the place, Pete started talking, softly at first, then a bit more adamantly.  The lid on the box was loosely closed figuring he might just fly out of there and whack himself again on the roof of the car.  We got to the rescue place, they took him immediately to the back to evaluate.  In a few minutes they came back out and said the good news was the Pete’s shoulders and wings were fine, but that he did have a head injury that was giving him some trouble.  They have a large aviary there, and they told us if he wasn’t ever well enough to be released, they would simply keep him there.  We have called since, and Pete was still having a little trouble – he could fly, but only in circles – a likely imbalance in some kind of fluid or something, but he was taking nutrition so they felt pretty positive about his prognosis.

I’ve decided the hummingbird showing up around our deck is likely Pete’s cousin on his father’s side, and that he’s showing up to let us know Pete’s doing o.k. and is grateful two flatlanders drove him a couple hours to the rescue place where the people are so very nice.  I’ve told him it worked out fine, we drove back up through Estes Park and over trailridge road which I LOVE, so it was a great day of beauty and adventure for us as well.  Plus I got a t-shirt from the rescue place and might have left a donation to make my heart feel better.

I like having plans, even loosely made.  I like having at least an outline of what to expect and then moving toward that, it gives me a sense of some security and stability.  And sometimes the unexpected happens, out of nowhere . . . a hummingbird flies into a window, another hummingbird shows up around a no-feeder deck.  In my humble and, when I let it, really simple and even uncomplex grace-centered theology, the unexpected is not always only a coincidence.  There is life-affirmation that comes through beauty that is not a human manipulation or creation, but simply the generosity and spontaneous presence of the holy.  Pete and his cousin are that for me right now.  Serendipitous beauty and surprising sacred presence can keep us going through hard things I think.

If you see Pete’s cousin hanging around your places, or maybe one of his other relatives, I think a few of them settled around the area, give them a nod and a smile a second or two of grateful awareness.  I believe God loves to bless us, and may love it even more when we pause to recognize it.

For some reason I didn’t think to take a picture of Pete before we left, I’m not particularly comfortable with selfies or otheries with my phone in general, but the name of the place is Greenwood Wildlife Rehabilitation Center if you ever have a dollar or two and you want someplace to send it where the people are the nicest in the world. And when the unexpected happens that changes your plans, maybe it’s God offering you a minute, or maybe two, of grace!