Some decisions are more momentous than others. I decided this late afternoon that I would try something I’ve rarely if ever done before, writing my blog on my deck at home. I’m a do your work at the office person. I love being surrounded by my books, maybe even my clutter, my Keurig single cup coffee maker at the ready, and the windows that face to the west that allow me to see trees and skies. Even when the pandemic hit and shelter at home became the rule, I stayed an office go-er. The church was locked tight as a drum, but I still had keys. A few days I walked because I wasn’t certain we were supposed to even be out on the streets. It was so weird. But I kept going in and I guess being the pastor at the helm gave me that perk. I could close and lock my office door so that even if anyone else was around, I wouldn’t be infecting them, at least that was my thinking. Having some sense of normalcy and a structure that felt familiar in a space that is the same worked for me, so I kept doing it.

This afternoon I kept gazing out the windows and not concentrating. Some days when that happens I get up and close the blinds but not today. Summer is finally here, at least weather-wise this week, and the blue sky and even the eastern Kansas humidity beckoned me. Take a risk it said, give it a try, laptops are meant to be carried from place to place to work – maybe even to a deck filled with flowers and a little sunshine. And what have I learned? I still don’t do well with change. 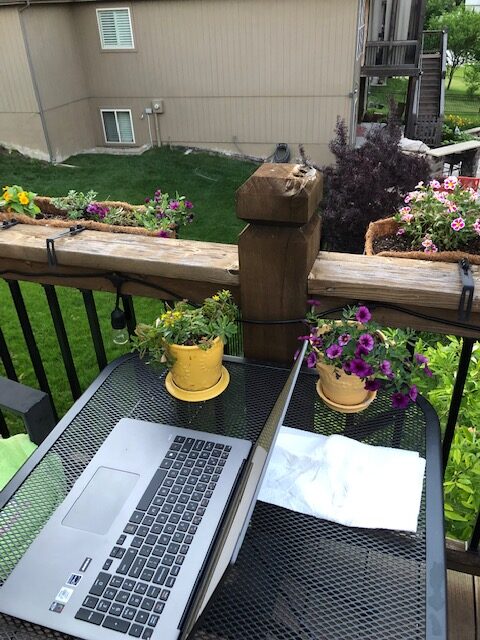 First while I was inside having some dinner, it rained. I came out and the deck chair cushions are damp, clearly I’ll need to sit on a towel, towel procured. I have my phone with me but my desk, er deck table is small because the deck is small so I decide to put my phone on the railing. So I didn’t exactly look at the railing but knew right where it was and proceeded to drop my phone over the edge to the ground below. Otter box protectors were made with me in mind. For some reason watching it go, almost as if it was in slo-mo made me laugh out loud. Sorta like could I get any more awkward and could this get any harder? There are no deck stairs to the ground so I go into the house, down the stairs, outside to the flower bed below and pick up my phone and voila’ it’s still in working order. Back up the stairs, and let’s create a blog.

Blank page, cursor blinking, somehow I thought creativity would hit like a ton of bricks sitting outside after a nice little shower with flower power surrounding. Nope. Time to let the dog on the deck. Max will inspire me. Maybe he picked up on my stress, but he would NOT settle down. He wanted on my lap. He barked at the neighbors. He barked at the cats inside the house. He pawed at my arms for a few pets. He licked my ankle, seriously? Gross! Back inside goes Max. The neighbor’s dog is let out – Aussie. Aussie is about 9 months old and is some kind of fancy doodle. Actually, I think some kind of Australian something doodle which is why the neighbor named him Aussie. He’s verrrry tall and verrrry floppy and too cute not to go down and pet him across the fence. I mean what kind of neighbor would I be if I didn’t?

Walking back through the house I realized NCIS was on tonight. I love me some Jethro Gibbs, don’t you? And they broke up a dog fighting ring on tonight’s episode. It was a rerun but it was my first run seeing it. He adopts the injured pit bull and gets suspended for beating up the dogfighting ring leader. He’s not sorry and has no remorse. I was telling Charlene today that the right answer to your dad when you’re getting grounded is NOT, “you can go ahead and ground me, it was worth it.” I chuckle when I hear that some people think I’m smart. Stopping to watch NCIS would surely spark some blog ideas, orrrrr, not so much. Well, other than the fact that even though Jethro Gibbs was as mad as he could get, he didn’t shoot the guy. So there’s that.

I’ve always wanted those hanging bare bulb lights that have a golden glow. I’ve seen them in magazines where people have outlined their privacy fences and decks with them, or hung them crisscross on the ceiling of their decks and it looks so homey. There is no ceiling to this deck, but we have glow lights this summer, they just hang along the waist high railing. When it gets dark enough if I’m still cursing, I mean using the cursor to point and click things for my blog, I’ll plug them in so you can see how warm and glowey they make the space. I’m sure that will spark my creativity – see what I did there? *snort

The news said tonight that people are not looking at their work lives the same as we move closer and closer to being farther and farther from the height of the pandemic and the shelter at home. In general a large number of people found they have been as productive if not moreso working from home than in an office. For many it’s the whole fewer interruptions around the water cooler and Jim Bob from IT popping in to load a program or Lynette from HR catching you between meetings to remind you to fill out form 37b for the SSA before the deadline looming in 3 months and 2 days. No offense intended for my exaggeration Jim Bob and Lynette! I believe I’m proving that once again I’m not one of the majority statistics. I’m not finding working from home very productive this evening. Perhaps I’m too easily distracted, wait a minute, I think it’s dark enough to plug in my glow lights and take a picture…squirrel? 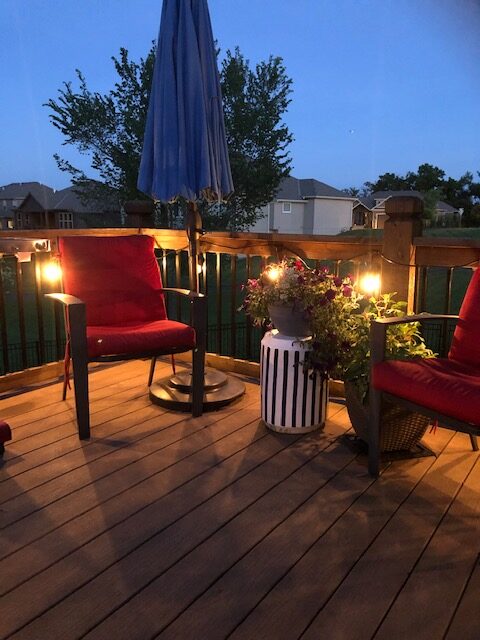 O.k. boomer. Am I allowed to say that? It’s a little what it feels like right now. Maybe I’m simply of the office generation. Or maybe it’s simply this is the maiden voyage and there’s a few leaks in my attention span that need to be gorilla glued. Or maybe for me, decks are meant for after work relaxing and never the twain shall meet. Or maybe the blog that doesn’t exactly have a point is done. Seinfeld anyone?