A very generous-hearted and knowing and wise person brought me this coaster last week: 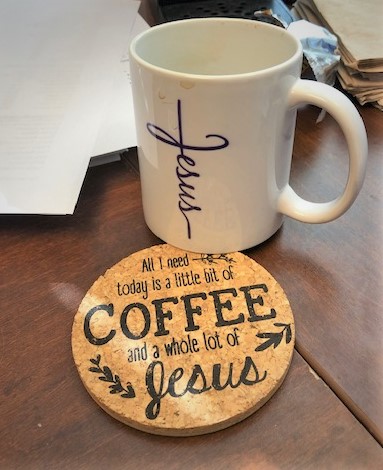 Yup, all I need today is a little bit of coffee and a whole lot of Jesus! Little did she know that a week later, with large fluffy snowflakes falling gently to the ground, that sentiment would even be more welcome and appropriate than it was the day of its gifting. Yes, I know we live in the Midwest. Yes, I know we’ve had snow as late as May. Yes, I know that it melted as soon as it stopped coming down. Does that make me happier about the fact that it came? NO! No it does not. I like snow in December, preferably right around Christmas – either enough before Christmas Eve that it doesn’t hinder services, or right as we’re leaving at midnight. Then it can snow 3 ft – you can get to your family’s house a week later, I promise! Snow starting at midnight on Christmas Eve and continuing through Christmas Day is sort of a dream – a Hallmark movie channel ending. But April 20? Nopity nope nope.

You know what else is nopity nope nope? Snakes. Yes, I know they have a purpose as do all of God’s creatures that fauna the earth. Yes, I know they eat rodents and I’m certain that is a good thing for all of us. Yes, I know the story about Adam and Eve in the garden and the snake being the tempter is more illustrative than it is an eternal statement about all snakes. But nope.

You know what else is nopity nope nope? Poison Ivy. Yes, I know you can recognize it and therefore stay away from its negative effects. Yes, I’m certain it has a purpose as do all of God’s plants that flora the earth. Yes, I know that in the fall the vines turn a lovely hue of maroon and then supposedly die to help compost the coming of spring and new life. But nope.

While I’ve never been bitten by a snake, I have had poison ivy. Before I realized the three small blisters in a row on my shin and another three on the inside of my forearm were the ivy, I itched and then shockingly learned how many places your hands touch before you wash them. The next day I was attending a social event for the fourth of July, and thinking I would both protect the other guests and hide the blisters and blotches on my arms, I wore a long sleeve, albeit 100% cotton, blouse. What the ER doc told me later is that is the worst thing I could have done. Heat and sweat simply make the ivy happy to explode in every direction. They gave me an IV of something, a shot of something, and then prednisone pills to take until they were gone promising that the ivy blisters would dry up quickly and my sickness would abate. They also shared that if I ever got the ivy again, it would likely be as bad or worse since I’d let it go that far this first time. So nope. Maybe that’s why I’m not big on gardening and working in the yard, I just put that together. Planting and tending are not my favorite things. I might have the ivy ptsd and I’m actually serious with that. Hmmm.

You know what is yuppity yup yup? The smell of lilacs not from a bottle of perfume or a candle. Real lilacs from real lilac bushes. They are the definition of spring. We had a mongo huge lilac bush in the back yard on the farm. Actually I think there were two bushes that grew huge and we made a tunnel through the lower part between the trunks. In the spring when they bloomed, you could army crawl into that opening and both be hidden and totally surrounded by blooms and their spring-time aroma. They say smell is one of the strongest memory initiators – when I catch a whiff of real lilacs, it does take me back. I’ve always thought I would have a lilac bush or two wherever I lived, but I guess because of that whole ivy incident I don’t like planting and tending thing, I’ve truly never had one at any of the homes I’ve inhabited through my lengthening years.

You know what else is yuppity yup yup? Cats and dogs. Not cats or dogs. Not I’m a cat person so not a dog person or visa-versa-visa, but cats AND dogs. Yes, I know cats don’t have the best rep, but they have great street cred. Yes, they can be stand-offish, bossy, and kinda don’t care if humans live or die except for the providing food part, but they are also quirky and entertaining and on days that don’t end in y can be warm and loving. Actually they can always be warm and loving, it simply works best on their terms and not the human in question.

I guess God decided somewhere in the beginning that life would be made up of both yuppity yup yups and nopity nope nopes and it would depend on who the human was how they would respond to the flora and fauna differences. The overarching idea being that whether we individually decided the yups or the nopes of each one, we would recognize together that we need all of us for the world to live in the vision of God. 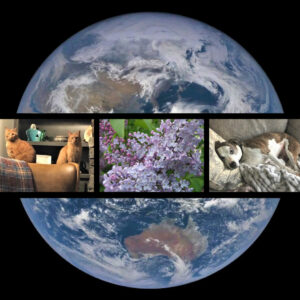 So “Earth Day” is Thursday, April 22nd. Given everything else that is going on in the world, many of us simply take that for granted – you know, the whole earth-is-the-only-spaceship we got thing. One of the many learnings God may be hoping we come out of this covids 18+1 chapter is the gift of having an outdoors to be into. Maybe the irritation of mask wear could remind us of the grace of having clean air to breathe without a mask in the outdoors and might that translate into how we increase awareness of carbons and oxygens and shrinking ozones.

Snakes are a nope for me, but I don’t want them to cease to exist. Poison Ivy is a nope for me, but that means I can take responsibility for being aware of my surroundings. Cats and dogs and lilac bushes are a yup for me, and I can use the joy they give me to energize my care for alla God’s creation. Take a moment this earth day and be grateful for all your own yuppities and nopeities and rekindle the commitment to take care of God’s allofities!