When I was first out of seminary, I lived in the northeast section of Kansas City, Missouri. The house was about 8 blocks north of Independence Avenue and a couple of blocks from the Kansas City Museum off Gladstone Boulevard. Cliff Drive from which you could see across to the northland ran right down from the Kansas City Museum and you could tell it had once been a grand community and the old growth trees spoke well of its history. It was the most diverse community in which I’ve lived, known as a primarily Italian neighborhood, there was still that influence as well as other ethnicities, wide economic ranges, and varied political perspectives. When my neighbor Vera found out I was a pastor, she decided we should start a business where she would market my in-home wedding “chapel”. She would bring the couples in the front door, I’d do their ceremony, and her daughter would lead them out the back door and collect the money which we’d split 60-40 with she getting the 60 for drumming up business for me. She said she knew a LOT of people living in “sin” in the neighborhood and I could just take care of that for them. It never came to pass in the five years I lived there, but it was rather inventive and creative I thought. I had no doubt she would have been a great business partner. 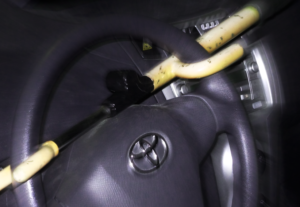 It was a terrific and challenging neighborhood to live in all at the same time. The personalities were all quite colorful in opinion and life experience AND my car was stolen three times. The first time it happened on a Saturday night, of course, and so as I came out Sunday morning to head to church, there was a small pile of glass where my car should have been. To be honest, in that moment I became very aware of the human ability to react into denial and disbelief in an instant. I initially thought my car must have rolled down the alley because I didn’t get it clear into park. But it wasn’t at the end of the alley. Then I decided I must have parked it in front of the house rather than in the back, because sometimes I did that if I got home late. No, I hadn’t done that. It only then occurred to me that the pile of glass was the result of someone who didn’t own my car breaking out the window, getting in the car, and driving it away. The car was found all three times, in various states of disrepair, and I found out quickly that Barry Manilow tapes are not popular with those who abscond with cars in the middle of the night because they and Aretha Franklin were always left behind. One time the actual ribbons of the cassettes were pulled out and the cassettes smashed, I guess the “copa . . . copa cabana” was a means for inciting anger, or maybe it was “r-e-s-p-e-c-t, find out what that means to me”. By the third time, my denial and disbelief had completely disappeared mostly, and I got one of those steering wheel lock things and never kept more than ¼ tank of gas so they couldn’t get very far. And whether it was those things or that I had boring music, my car wasn’t stolen again while I lived there.

Why am I thinking about that? So Monday the work started for replacing our compressors for the sanctuary air conditioning. When I came back from a meeting off campus, there was a huge crane in the parking lot and a large truck blocking the entrance so that no one inadvertently drove into harm’s way. I ended up parking up in the little alleyway between the kitchen door and the playground on the southeast side of the church. It worked well, the kitchen entrance was simple and easy to access, and I kinda liked walking through the sanctuary the day after Easter and “seeing” in my mind’s eye, the fun of real people sitting in the chairs for worship again. Aaaaah, what a glorious celebration is Easter Monday! Only later, when I had another off-campus meeting – life getting past the covids 18+1 means increased travel – and I walked firmly and confidently out to the west parking lot where I always park to get into my truck for said meeting, it wasn’t there. How quickly I reverted back to the early ‘90’s and for a half second to maybe two, that feeling in the pit of my stomach returned . . . my truck has been stolen! For a moment it all flashed back . . . how long will it take the police to come, how long will it take them to make their report to start looking, what shape will my truck be in when they find it IF they find it. And just as I was making the turn toward punching in 911 and trying to decide what’s wrong with this world, it hit me. Ummmm, nanette, you parked in a different place earlier today, I know you’re on the slide toward a new decade of life, but wake it up!

Wake it up, indeed. Mark 16:8 “So they went out and fled from the tomb, for terror and amazement had seized them; and they said nothing to anyone, for they were afraid.” That’s how Mark’s resurrection story ends, and can I confess? It is in some ways, my favorite ending, because who of us wouldn’t have? In fact, who of us haven’t? I believe all of life is saturated with the sacred, and as limited human beings, we are only aware of some of that some of the time because we get in the way a LOT. So then when we do experience moments where it may be made more clear to us than we can almost imagine that God’s presence and promises are true, sometimes we simply flee from that possible reality because we’re afraid to believe it and afraid not to believe it all at the same time! What if we believe it and it never happens again? What if we don’t believe it and it never happens again? What if we believe it and no one else does? Will that mean it’s not true? We are so wonderfully human and are so very creative at making what is sometime profoundly simple, profoundly difficult. Denial, disbelief, fear, terror, and amazement – we all experience all of those and more. And yet, in the midst of all the fleeing and the terror and the amazement, God still shows up, and then shows up some more, and then shows up some more. Love simply will not lose where God is concerned!

I’m thankful I only misplaced my pickup in my mind for a bit or two of a moment. I’m also profoundly thankful for living in the northeast part of Kansas City beside Vera and amidst the ups and downs of a community at once historical and deeply rooted yet also changing too rapidly for folk to comprehend and adapt. I learned from the nice police how to start a car without a key, never had to use it but you never know, and I also learned that there is a resilience beyond denial, disbelief, and fear – I think the first women at Jesus’ tomb learned the same thing. Maybe that learning is part of the resurrection story we still live.