It is most interesting to put a sermon series together for after Easter. O.k., probably only most interesting if you are a pastor. The world moves from Christmas to Easter as kind of a journey from a beginning to a culmination, and the feeling following is . . . then what? We’ve hit the two biggies and while Pentecost is coming, there aren’t really widespread Pentecost decorations, plans for family gatherings with large traditional meals, and there aren’t wrapped presents nor baskets to hunt anything chocolate. I suppose we could start marketing a big fire since the scriptures tells us the Spirit descends on the disciples with “tongues as of fire.” But a fire in the spring is a seeming oxymoron, at least we hope that by May 23rd it will no longer be firepit weather. What do we do post-Easter with nine months til Advent?

We could simply forget about the church and our faith til interest ramps up again in the larger society for the larger holidays. We could decide that if God really wanted us to pay attention, God would have come up with another big holiday in-between Easter and Advent, I mean more intriguing and eye-catching than Pentecost seems to be. We could be thankful for the rest from having to purchase new clothes for those pics on Santa’s lap or with those life-size Easter bunnies none of which, I’m sorry, look like anyone should be sitting on their laps or looking at their most often oddly red eyes.

Easter . . . then what? Sometimes that’s what a pastor will name a sermon series after Easter, I think I’ve probably done that somewhere in my history. Not this year. This year seems different. I believe I heard this morning that as of now for the state of Kansas, anyone who wants a covids 18+1 vaccine is eligible to sign up and receive one. So about the time of Pentecost, will we have reached herd immunity? 70% critical mass of people who if contracting the virus will not likely end up in the hospital with serious or critical illness? And what does that mean? New life in new ways yet bittersweet because of the over half-million who have died in only a year? What does that mean for a sermon series filled with post-resurrection appearances of Jesus?

This year I have come across a book entitled: “On the Brink of Everything” – what’s not to love about that title??? The author is Parker Palmer and the full title is On the Brink of Everything: Grace, Gravity, and Getting Old. I know, right?!? I’ll probably take the sermon series in various directions not parallel to the book, but it’s such a great title, both in the main, and with the furtherness of the final three words. What struck me most was that I think, especially this year, Easter and the promise of resurrection and new life does indeed, put us on the brink of everything! On the brink, on the threshold, on the starting line – however we want to picture it – we stand at the door of opportunity. It’s like we’ve rebooted, and the screen is just coming back up and into focus and all the programs we have downloaded have refreshed and we get to decide which ones to keep and which to delete. Did I take that metaphor a little far? But you know what I mean. 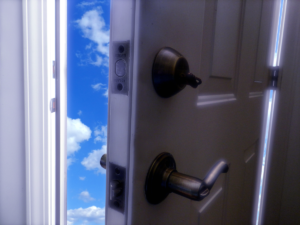 I want us not to miss this opportunity! Everything old is new again, and everything new is new again. Standing on the brink we have the benefit of perspective and vision. Knowing the tomb is empty allows us to trust and be affirmed that God is faithful to God’s promises and that life puts death in the rearview mirror. Given that reality, what joy is there in choosing to live with generosity, grace, and with a fierce fearlessness that empowers us to try new things, to tweak and grow the old things, to leap before we look, to look before we leap, or to be so busy looking and leaping at the same time that we forget what we can’t do!

I think that’s what the disciples found themselves doing moving into the meaning of the empty tomb that initially was unbelievable, processed into a faith of believability, and moved into actions they could never before have imagined being courageous enough to take.

Peter walked on water with Jesus, then he denied Jesus, then he pondered the empty tomb, then he preached on Pentecost, then he baptized the gentile household of Cornelius against the better judgment of the rest of the Jerusalem apostles, and then he was crucified upside down because he didn’t believe he was equal to Jesus. So maybe we decide to try some new things because frankly, in comparison, our risks don’t quite reach that level???

This Easter feels to me like a different kind of beginning of new life than we have experienced in our current chapter of his and herstory. See what I did there? A little risky! wink We may be surprised at how God processes us through this season of new life, gives us strength we might not have believed we have, and creates a newness we haven’t yet imagined.

Yes, “On the Brink of Everything,” that’s where we’re going post-resurrection toward Pentecost. Stand there with me – and then we’ll leap together into whatever comes next!