I caught a fish a week ago Saturday.  Simply an innocent fish, minding his own business in a pond out near Tonganoxie, Kansas.  I have a friend with acreage in that area that has two ponds on it that are stocked with all kinds of fish, one of which is a wide-mouth bass.  I can relate.  I don’t know why he took the hook with the lure on it.  I was reeling it in without much attention and was so close to the surface when wham, he just took it.  There were great-nephews in the boat with me.  The youngest one was trying to give me instructions and, unsurprisingly, I wasn’t much listening.  I was a little worried about the fish.  We’d already had a marvelous supper.  Steaks from the grill, the best cheesy smashed potatoes that you can imagine, and a little tossed salad to make me not feel quite so bad about the 2nd helping of cheesy smashed potatoes I allegedly had. The fish did not need to provide my dinner.  But there he was, dangling from my lure in his lip.  We took him over to the dock to show him around.  I kept dipping him in the water as we went so he could breathe.  We took a picture or two and I was trying to decide if I was going to take him off the hook or let one of the boys, and I dipped him in the lake while I was contemplating and he took off on his own.  Canker sores on the inside of your cheek or on your tongue where you mistakenly bite are terribly sore, but they do go away.  I figure that’s what my wide-mouth bass ended up with that evening.  I wonder if fish cuss?  My great-nephews now know their great-aunt who happens to be a pastor sometimes does.  Some lessons in life come early.

They came to stay a few days in Tonganoxie to get away from work and home and some of the screen time in this covid 18+1 chapter to be outside together, play games, and fish.  My guess is they previously in all of life had never thought of Tonganoxie being a vacation destination.  They had other trips planned in places that likely had water parks, and museums, and go-kart tracks, and amusement parks.  And they came to northeastern Kansas instead.  Their great-aunt might have had the best time of them all.  I was chauffeured on the Honda Mule around the property by two different great-nephews going varying speeds over small and larger bumps, but I held on and we giggled. 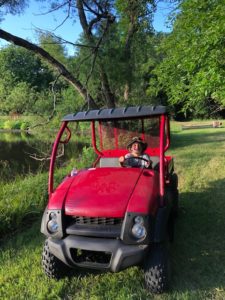 I found out my niece-in-law is about the only family member not afraid of snakes.  I warned, from previous experience, that turning the boat over sometimes revealed a snake, and that they had been known to hang-out in the shed where the mule and the mowers are kept, like hanging on the light switch box or coiled around the pole right above the door opener.  She simply told me when you have kids, you learn not to be overly-dramatic about these kinds of things so they come to appreciate not being afraid of stuff too.  I decided it was good I didn’t have kids because I would have shown my fear of snakes from the beginning.  Maybe the balance would have been not seeing me afraid of speaking loudly and in front of large groups of people about Jesus.  Ummmm, probably the lack of fear of snakes outranks that one.

That Saturday afternoon into evening I watched my former “little” nephew and niece-in-law be great parents.  Yes I’m biased, and yes it’s also true.  “Dad” was the best rower of the boat, so he laid his own fishing pole down to row a couple of boys around the lake so they could fish.  And then came back and got mom so she could as well.  This old aunt got teary.  Leave me alone, even tough grizzled pastors in the midst of a pandemic sometimes get caught with something in their eye.  And niece-in-law, how long have you been fishing?  Well when you have kids, you learn to do a lot of things you didn’t before, and when you have three extremely active and physical kids, you figure out how to create games with them, how to help coach little league, how to keep searching til you find someone who can help with a unique reading disability when you’re pretty far away from metropolitan areas where most of the specialists reside.  I know you’re expected to grow up when you get married and have kids, and I know some don’t, and I’m grateful when they do.  I think that something in my eye was gratefulness, not because of perfection, but because of such deep love that moves into a maturity that sometimes catches old fish-catching aunts by surprise. 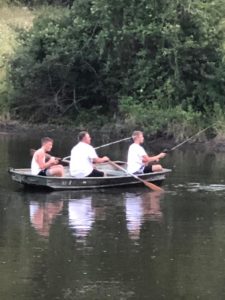 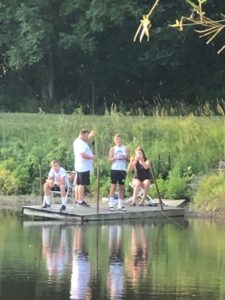 I don’t know how this covids 18+1 will end, I am convinced it will.  I don’t know the depth of how life will have changed, how we as people will have changed, how our expectations of each other and the world of which we are a part will have changed.  I think what I do know is that true humility comes in the recognition of what human beings can become when life throws the unexpected at us, and we decide how we want to face into the unknown.  I don’t know how long two ponds out near Tonganoxie will be a vacation destination, but I know it offered a space for togetherness and some laughter when Dad is singing in the shower and a couple of boys sneak in and throw cold water over the shower stall to let him know he’s not exactly Jason Aldean or Luke Bryan.  They get their orneriness from their Grandpas.  The memories of that one summer when we didn’t get to go to the ocean, and we didn’t get to go to the mountains, and we went out to that place with the fishing ponds and laughed and played games and raced the mule around the property and did some fishing, that memory may be one that is told over and over again and becomes one of the best of all.

The fish I caught may look like it’s only about 8-10 inches from the picture below, as I recall it was more like 12 to 15 maybe 18 inches when you got up close.  I have some great-nephews that will verify it, or be left out of the will, just sayin’. 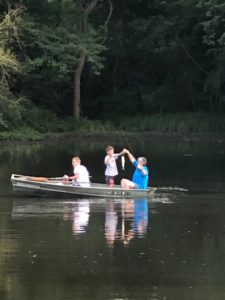 For we “Hamilton” lovers, the video today is the absolute best parody I’ve seen by a Priest who is quite talented.  And I might be a little jealous of his hat.