What would happen in January in the Great Plains that would gather all the clergy, perhaps a bit of a mandated gathering, together? It’s called Orders and Fellowship. Hmmmm. Law and grace? Works righteousness and mercy? Fairness and justice? Actually orders is short for the Orders of Deacons and Elders, i.e., the ordained and/or licensed clergy in the United Methodist Church. We gather in January to learn and experience inspiration and encouragement for the service of Jesus in our churches and in our communities of which we are a part. Fellowship is the part of the gathering where we connect and reconnect as peers, colleagues, and friends. We are probably as peculiar of a group as any group of professionals serving a particular vocation. Young and old, tall and small, first career and second career and sometimes third career, big church and small church, excited and energetic and not so much. We are probably not that different than the general populations we serve and hope to serve and are worried we are not serving in greater and greater numbers in the chapter of history we find ourselves entering the second decade of the 21st century.

The other things that happen are meetings before and after the “official” meetings. They happen over breakfast, lunch, during official breaks and sometimes self-made breaks that are unofficial. They happen over dinner, and post-dinner it’s o.k. to wear jeans and sweatshirt meetings. Those meetings are sometimes as productive and maybe, might I humbly say, more productive than the official learning experiences.

Pastor Kyle and I were at a meeting this morning at 6:45 a.m. I know, right? I was there 45 minutes early, because well, no sleeping sometimes at this point in my living. I pretended that I’m a morning person – Kyle might have thrown me under the bus on that with the “officials” with whom we were having a pretty productive meeting. And he was right, other than on Sundays, meetings that start before sunrise are not my favorite kind. We met at a place called “Bagels and Pour” and when I asked what the password was for the wi-fi, it was . . . bagels. Creativity reigns in EVERY place! snort I did not have a bagel that were all as big as your head. I did have a mixed fruit smoothie. I asked if they could put a shot of some kind of protein in it, the 6 year old working behind the counter smiled and suggested she could put a sausage link in it. I politely declined and still put a big tip in the tip jar because unexpected makes me happy at 6 a.m. in Lincoln, Nebraska in January evidently.

So then I cried. After I went and sat down, I cried. Really? Not because I was afraid, but because I wasn’t afraid and the gospel of Jesus free’d me from that fear of any human, or any power, or any principality. And that changed my life and my way of doing ministry. I don’t know that anyone else really saw any difference, but I did, and maybe Jesus did and probably heaved a sigh of relief because, finally.

Here we are, we licensed and/or ordained clergy in Lincoln, Nebraska in mid-January. We are here in different ways and different places on our life journey and on our journeys with the calling that Jesus has placed on our lives. You too? Maybe not in Lincoln, maybe not surrounded by other clergy, maybe not starting with hymns and a sermon before a meeting starts, but maybe you too are on a life journey and on the journey of the calling that Jesus has placed on your life. Perhaps life changing moments are unexpectedly in front of each one of us in the most unexpected or expected of places, and Jesus really does want good things for us, the question is do we? 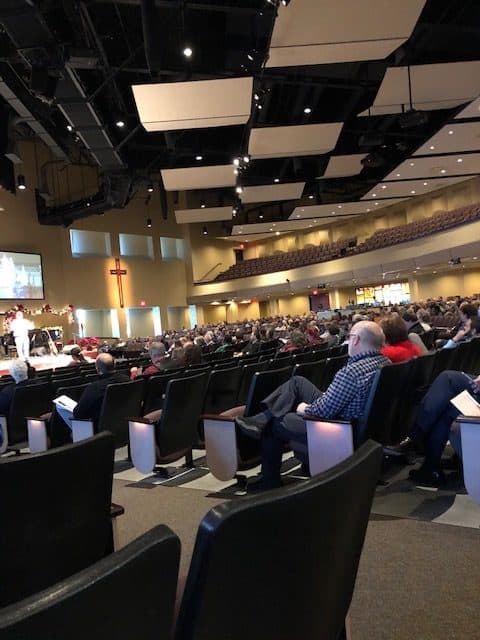