It’s been a challenging couple of days, and then this came. 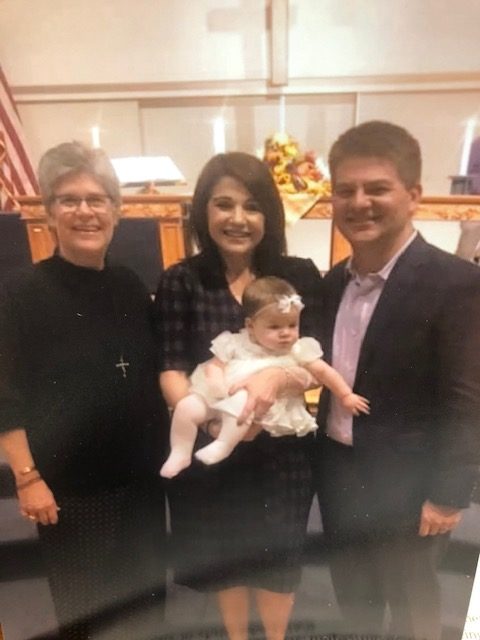 I was honored to baptize this cute little munchkin on Thanksgiving Sunday. Mom and Dad were a little nervous because she’s reached the age where she really doesn’t like anyone holding her but a parent. I think she decided, when she came into my arms, that I was so odd that crying took a backseat to staring. Then when I brought her down the aisle, the Grace congregation was so peculiar, that again, she simply forgot that she wasn’t supposed to like someone else carrying her. She is of strong personality. I. Love. That. And I love that on Thanksgiving we named and affirmed that God has loved her from the beginning, loves her now, and will love her into every tomorrow to eternity. That love shows itself through her parents and extended family, through their neighbors and friends, and through this church full of peculiar people and pastors who struggle to follow Jesus in the midst of difficulty, sometimes disagreement, lots of laughter, and no small amount of joy and hope.

It’s Advent. Waiting. Wondering. Wandering. And probably a bunch of other W words that I’m not thinking about. None of the three I’ve mentioned are in my top five things I like or am particularly good at doing. My comfort level is having things planned into detail. My security is knowing where I’m going, the path to getting there, and what I’m likely to experience along the way. My attention span appreciates things happening as immediately as they possibly can so I don’t have to spend time being anxious or going over the preparations for the hundredth time. None of that is really Advent-like.

The sacredness of Advent is, in many ways, the freedom from Chronos or linear time, and the freedom to Kairos or the fullness of time. Advent is less a time-line than a meandering journey. An invitation to make preparations while we await Jesus being born. Those preparations most obviously have to do with decorating houses and rooms and trees. And those preparations have to do with our readying our spirits, hearts, and those places of vulnerability where a little child may lead us (Isaiah 11:6). I’m not certain I want to be led by that Holy Spirit child that in-dwells in us. That child that invites us to see things in new ways, to explore different paths, to see others as intriguing, peculiar, and odd in the best sort of way. To see with the eyes of a child baptized into our community on a Thanksgiving Sunday. A child who isn’t certain anyone is as safe as the arms of mom and dad, and yet, has that fear overtaken by the possibility of someone and some-thing happening that hasn’t happened before that is curious enough to keep her fear at bay and in doing so, to have one more new life experience that proves to be safer than her fear would have allowed.

When was the last time we allowed our curiosity to overcome our fear? Our intrigue with how different people are, that rather than resenting their “wrongness” in their difference, we risked the vulnerability of getting to know them that their “wrongness” somehow took a backseat to their humanness and a realization that knowing them proves to be more valuable than our fear might have allowed.

It snowed for Thanks-mas at the Roberts’ homestead. One of the Roberts’ children makes Christmas a bit difficult with worship services til midnight on the Eve, and reaching an age a few years back where driving across Kansas between 1 and 7 a.m. was no longer a possibility. So we have Thanks-mas. I don’t know if it’s ever snowed right on time before, but I was thrilled. It was so beautiful and for some miraculous reason, the wind didn’t really blow as it snowed, so it came down with such gentleness. 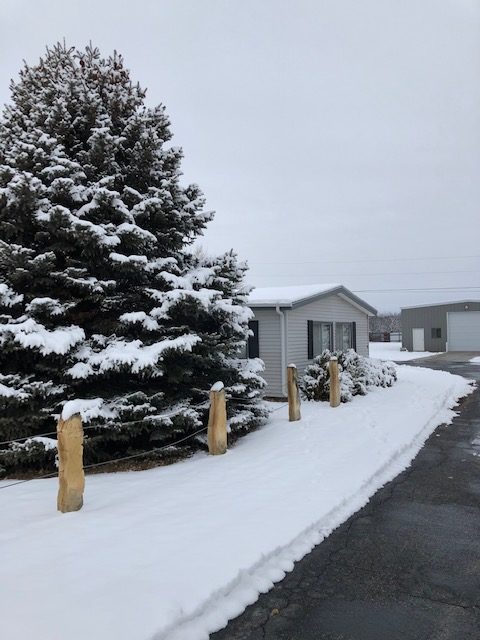 When my mom and dad first moved to this house, the blue spruce was shorter than me and they put Christmas lights on it. Even after it became too big to put on Christmas lights standing on the ground, Dad used the tractor and loader to do the lights for a few years. Now it’s too big for that to be very reasonable. When the snow came, and without the wind, it looked magically for me like Christmas.

I always watch for it. That moment that will shout to me somehow that Christmas has arrived. I’m never certain what it will be. I’m never certain when it will come. There have been some years I’m not certain it ever did. But I watch for it – not patiently, not with much settledness of spirit that I don’t know ahead of time what it will be in any given year – but I watch for it. This year it was the snow at Thanksgiving on a tree in my parents front yard, and the peace of no traffic, Max tromping around in the snow with me, and the warmth and light of parents I’ve known for a very long time. snort

My Dad is still using the same tractor and loader that he’s used since I was a toddler, he reminded me that I’m three years older than this old Ford tractor. I reminded him that my engine hasn’t had to be rebuilt twice. 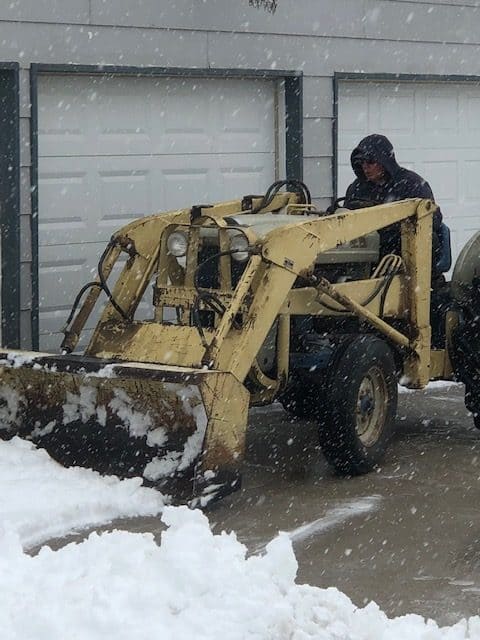 He still moves snow with it so we can get out and about without getting stuck, and also I think because it’s fun. Time moves slower for me in that place – at least internally. I’m not certain my impatience or anxiety disappears, but I am certain that this year with a blanket of snow, the sacredness of the season of new life has brought a peace in the midst of the difficult and complex days and relationships with which we now live. Perhaps some of what that newly baptized child on a Thanksgiving Sunday morning experienced when fear was overtaken by a Spirit-filled courage allowing an expansion, if but for a few moments, of safety and family and home.

It’s Advent. Preparation. Patience. Wondering. Wandering. Waiting. What Spirit is seeking room to be born in us anew? What fear might we need to overcome, what vulnerability might we need to risk, what beauty awaits our vision? Maybe it’s true, maybe a little child will lead us to an ever-eternal if new understanding of home.