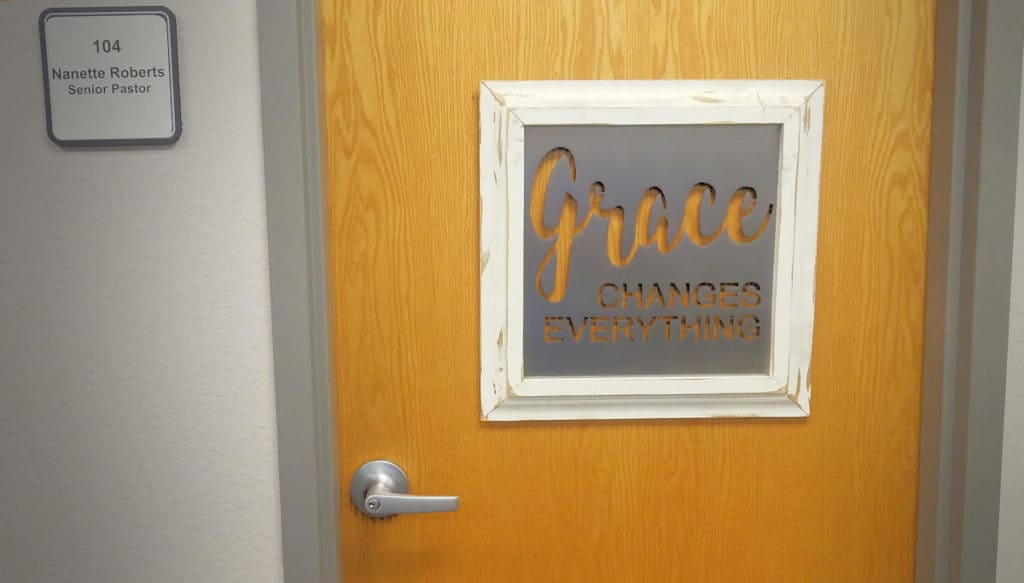 I have a sign on my door that says “Grace Changes Everything.”  It’s not really meant to be hung on a door, it’s really more meant to hang on a wall.  Because it hangs on my door rather than an immovable wall, every time I open and close my door when someone comes to meet with me, it rattles.  I could stop it from happening fairly easily, but I decided a while back I don’t want to. I don’t want the fact that grace changes everything to be silent.  I don’t want it to simply hang on a wall to be looked at and appreciated. I like that it rattles around and catches people’s attention as they come in and as they go out because no matter what the nature of our conversation has been, the foundation starts with the fact that grace changes everything.

One day not long ago someone stopped by on the off chance I might have a minute.  Life was hard for them, but on that particular day it was overwhelming. We talked for a time and decided a couple of things that might help everything seem less overwhelming, and we prayed, and when I opened the door, the frame rattled on the sign, and the person looked at me and said, “I think it really does.”

One day not long ago someone called on the off chance that I might have a few minutes later that day to meet.  They wanted to know how things were going in the church, how things are in the denomination, how things are going at the Center of Grace.  Then they slid a gift across the table to be used for anyone in need in our community for the holidays or, they said, maybe it could be saved and used later in the year when folks tend not to give as generously as they do at holidays.  “Yes” they said, “that’s exactly what I want you to do, I want you to wait and when all the holiday generosity has faded and there are still people who have needs but aren’t being paid attention to so much, that‘s when I want you to use it.  I think I didn’t know that’s what I wanted until I was sitting here.” As they left, the sign on the door rattled.

One day not long ago a family came in to visit about a death in their family.  It was one of those expectedly unexpected ones. There’s sickness and frailty and age, but they had been doing pretty well until a trip and a fall and not enough physical resources to recover.  And there was guilt. There always is, you know, in families in grief. It doesn’t matter if there is nothing to be guilty around from anyone with any objectivity looking at the situation, I’ve simply learned it’s part of the process of our pain.  There’s simply guilt. I shared that Sherwin Nulind says in his book “How We Die” in trying to take the mystery away from different aspects of the dying process, that, “we die how we live.” In other words, if we are kind and caring in our lives, we’re likely to be kind and caring in our deaths; and if we’re not, we’re not.  A chronic disease or illness does not suddenly make us a different person. For them then I shared, their loved one was loving, and independent and strong-willed. So while he was instructed on mobility limitations given his condition, finally he was not about to let any of them be constantly with him anytime he wanted to move.  It simply wasn’t who he was. He made the decision to get up and walk alone even knowing the limitations, and he fell. Shoulders dropped, tears came, and a breath of some relief. We could actually chuckle about how stubborn he was and how we wouldn’t have wanted him any other way. When we opened the door for them to leave, the sign rattled.

One day not long ago, I brought my dog to work.  It might be that day is today. I brought him because we had an unexpected meeting on our early morning walk with two other larger dogs from the neighborhood whose people don’t think they need to be on leashes.  Max got upset, I got upset, I visited with the people for whom leashes are not a priority – I visited respectfully but firmly. When we were done, Max and I were both shaking. I decided he needed to come to work with me – more for me than him I’ve decided.  My temper was still rather increased, my blood pressure perhaps as well. As I brought Max in to my office and went to shut the door, the sign on the door rattled.

“Grace Changes Everything.”  I hope the truth of that rattles its way into your lives as you prepare for your Thanksgiving holiday in whatever forms of family and friends with whom you may gather.  I hope the frame around the sign rattles against the door of your heart, and maybe even your hurt from days recent and days long past, and that somehow it brings healing.  I hope when we move with grateful spirits into the season of Advent and preparation for the birth and promise of new life, Grace Changes Everything, is so NOT silent as night, but rattles its way into everything we do and see and know and sing.  And maybe one day, maybe on an off chance or maybe even with great purpose, the rattling of the sign will be the voice in our witness to a world that needs to hear and know beyond the shadow of a doubt that Grace does indeed, Change Everything!!!