Our new United Methodist Calendar and Workbooks came in a couple weeks ago. It’s always the beginning of October when we get to have them ordered . . . I’ve had one every single year of my ministry and I have kept them all. There are years when I have been quite good at keeping a daily journal, and many years when I have not been so good, but my UM Calendar and Workbooks have most of what I have done during the days, weeks, and months of a given year recorded. Those notebooks contain weddings and funerals and the names of the folks for whom we celebrated new beginnings and new beginnings after endings. They contain speaking engagements and class times and days taught and most usually what the title of the book or Bible study was. They contain vacation days marked out and the beginning and ending of degrees and semesters and classes and paper deadlines and graduation days and times. They contain appts. at vet clinics and doc offices planned and unplanned, and trips home and worship times and Christmas Eve schedules, and which Pastor was preaching which word on the many Good Friday services and the sometimes changes in Sunday morning schedules to fit in all the Easter services before noon. They contain lunch dates, names, times, and places, and visits to hospitals and homes, and mission trips to where and when, and beginnings and TTFN’s (ta-ta-for-now) at churches I’ve served. Yes, btw, there were letters representing words BEFORE text-messaging happened. Who’d a thought?

This picture is quite symbolic of how a new calendar starts and what one looks like toward the end of a year of use. 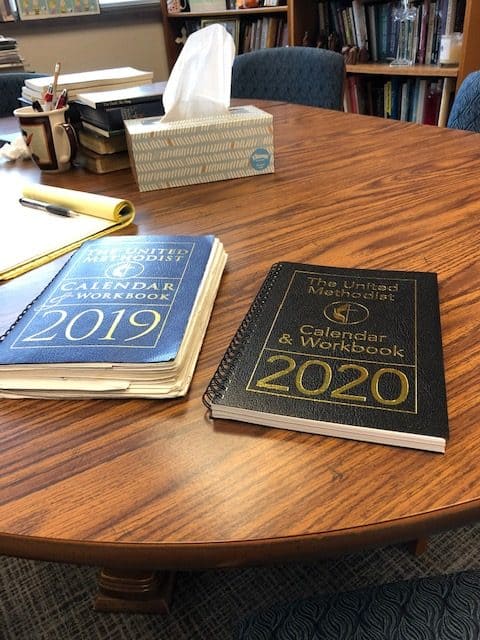 I tend to stuff things in it during the course of a year – sometimes worksheets from training or information sessions, sometimes letters, the old-timey snail mail kind – my mom is STILL the best at that – and stray finance reports on which I’ve made notes to remember the following year and some Ad. Bd. minutes that are a record of a decision made I want to keep track of for some reason. So the notebooks get thicker through the year and the metal bindings begin to come apart and I’m always happy when a new one shows up so I won’t start losing the things I’ve paper clipped or jammed into the old one. I have figured out that it becomes for me a living record and memory-keeper that is a practical way to re-find a few passwords or a forgotten name of a conference leader or book I wanted to order, and a spiritual memory-keeper of the sacred and ordinary moments of the days God gives each of us to live.

Yes, my phone has a calendar, and yes I both know how to use it mostly, and yes I sometimes record appts. for reminder in it as well. I’ve also come to understand that there is something about hand-writing appts. and scheduling on the pages of paper in a calendar that lends itself to a concrete understanding of the passing of days, months, and years. There’s something I can’t quite articulate about the depth and meaning that comes from the tactile sense of the passing of time.

Spanish philosopher and poet, George Santayana, was the first to coin, “Those who cannot remember the past are condemned to repeat it,” which is now more commonly stated, “Those who do not learn history are doomed to repeat it,” the same but a nuance of difference. I believe that to be true in the patterns we can discern upon reflection of what is likely to happen if the same behaviors are followed that led to a particular consequence. Prophets in that sense are not so much extraordinarily endowed with mystical gifts, but rather see-ers of reality, reflectors of patterns, connectors to a known past, and predictors of likely outcomes if changes do not occur.

Where does faith fit into that we might legitimately ask. Can’t God choose to create different outcomes even if behavior patterns are the same? I’m certainly not one to limit what I believe God can do. AND, I also believe God invites us to learn forward from seeing realistically where we’ve been. I read a quote last Sunday that I share here:

“For if we perpetuate the luxury and inefficiency of our divisions, we shall surely miss the day of our visitation and the realization of our largest possibilities . . . Only as we transcend our denominational, party, national, and racial boundaries and barriers can we hope to fulfill the mandate of our Lord . . . The time is ripe for a great and striking emphasis on the Kingdom of God as preached by Jesus. The Christian emphasis shall be truly relevant to present-day needs and conditions, which shall dominate all other considerations and incentives, and which shall become contagious and irresistible.”
(Delivered by John R. Mott at 1939 Uniting Conference, Kansas City, Missouri. John Mott was a Methodist layperson and Nobel Peace Prize Winner).

The United Methodist Church split into northern and southern wings in 1844 although the tension had been growing since the early 1800’s. At the General Conference in 1844 one of the Bishop’s who had married a woman who owned slaves was voted and asked “affectionately” to resign. The southern wing of the church insisted he stay or it would “irreparably” injure the southern church and the nation. In 1845, Annual Conferences throughout the South sent delegates to a convention in Louisville where they formed the Methodist Episcopal Church, South. For the next 95 years, the two strands of the Methodist Church operated separately. (taken from author Phillip Stone in the SC United Methodist Advocate). Hmmm, the Methodist Church was split for 95 years over whether or not we thought persons of color were humans created in the image of God, or property that could be owned. 95 years.

We are still not at a place of racial justice within the reality of the United Methodist church or our nation. And, in the church as in the nation, progress has been made and there are no laws that prohibit persons of color from the sanctity of marriage regardless of skin color, or any prohibitions against being ordained, nor is there any longer a split between any part of the church over our understanding that biblically we understand all persons of any level of melatonin in the skin or any other physical differences are created in the image of God.

Yet we stand at the threshold of division and separation in the church AGAIN. And again it is over whether or not we believe God created all human beings as they are and called them good in the very act of creating. And we have laws on our books as a denomination that prohibit the sanctity of marriage and ordination for those evaluated and deemed worthy and gifted for the calling of service in ministry. Our prohibition is not a question of skills, or calling, or faithfulness, it is the question of God’s ability to create human beings as they are. Some say yes, God created and creates all. And others say not so much. And the church is at threshold of separating . . . again.

My fresh new 2020 United Methodist Calendar and Workbook has two dates with writing already on them. January 1, when the mean-spirited traditional plan goes into affect and we together witness whether and how many charges will be brought before Bishops and how those Bishops will respond to those officiating same-gender weddings between those deemed faithful to live in covenant, and for serving in ministry while living in faithful and loving same gender covenants. And May 5 – 15, the dates for the next General Conference of the United Methodist Church which will signal which direction our church will go – perhaps for the following 4 years, or perhaps for the following 95?

We don’t have to question the presence of the abundance of God’s grace, mercy, and forgiveness, we MUST question whether we are willing to learn from our history.