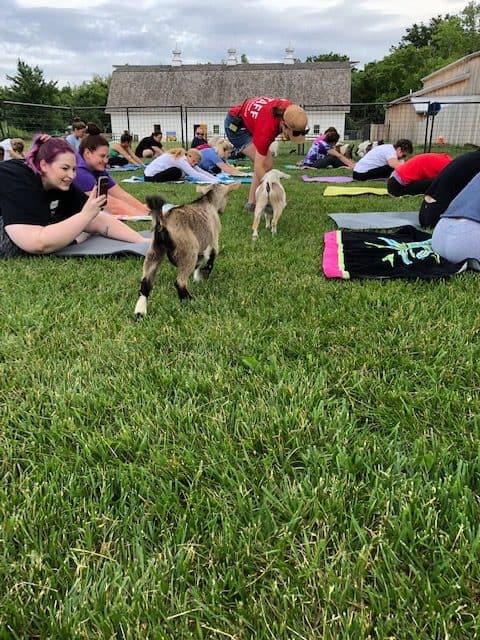 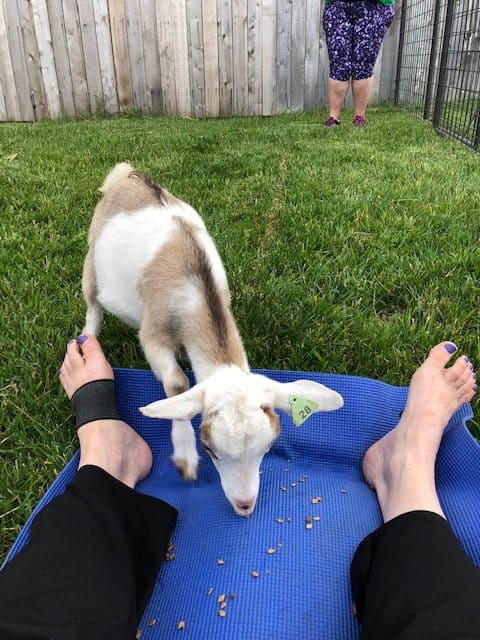 What does every summer need?!? I finally found out in this, my 57th summer on this earth, GOAT YOGA!!! Remember that little event we call “Extravaganza”? This year some very lovely and generous people are willing to have dinner with me at my favorite Bang Bang shrimp place. AND some very lovely and generous people were willing to bid and win sessions of Goat Yoga at Deanna Rose Children’s Farmstead. What. A. Hoot! Not even kidding. The goats were born at the Farmstead in January and February, and they simply run around the fenced in shady and grassy area where about 30-40 yoga-ers have mats and are moving through healthy poses for relaxation and strength! We were told as part of the instructions before participating that goats do what goats will do, so if you are one of the ones who’s mat gets baptized or otherwise receives a bb (goat-dropping) that it’s good luck. I was lucky, but not as lucky as Kyle and Hope!!! They were double lucky, and if I recall, maybe even more than once. The goat wrangler is a young woman who is a bit like a pied-piper with a bucket of appropriately nutritious goat treats and as she wanders and scatters, the goats come and nibble and graze and talk . . . a lot . . . maybe even more than me! Of course it is only appropriate to talk back – in goat of course. I’m not certain what I said to them, but I tried to make it filled with grace.

True confessions . . . I’ve never before participated in yoga. I’ve wanted to with Robin Olson both here and/or at the community center, but I’ve allowed life to get in the way. I know Robin is about the most patient person ever, so I figured she could handle my not-very-flexiblishness and still be encouraging. The yoga instructor for the goats was very centered. As you might imagine, the goats are not only cute, but somewhat distracting, and she simply kept going and giving instructions and vocally and physically inviting us into movements that had names. I wasn’t totally focused but I remember something about being a table and another one about being a warrior. I liked that one – Xena, warrior-princess, came to mind. I don’t remember much about the show except Xena won many of her battles against evil, both intellectually and physically, nothing wrong with that!

I’ve had friends tell me yoga is relaxing. Another confession. A couple of movements I tried to do I found myself saying aloud, “I do not find this very relaxing.” A nice yoga afficianado near me shared that a lot of times you realize the relaxing nature of yoga after it’s over. I think that’s true about most exercise for some of us. Somehow over a post-workout double scoop from B and R or a butterfinger blizzard, it does feel better! snort mostly joking . . .

Each of the sessions, as I looked around at the folks who were part of the groups connected to Grace, and they were having fun, and smiling, and laughing, and threatening to take pictures of interesting attempts at the yoga positions, I thought what joy there is in community gathering and relationships, in generous hearts who make donations to missions that reach far beyond our walls, and a child-like spirit that continues to live in each of us that loves the unexpected nature of baby goats as they run and play and well, do what baby goats do.

My thanks to Nancy and friends for Session 1, and Kelly and friends for Session 2, and for Liz whose creativity in finding new experiences for the pastors seems to never end. If you had told me in seminary that someday, as part of my position as pastor, I would be doing goat-yoga because it would raise money for mission beyond the church walls, I would never have believed it – I kinda still don’t believe it a little bit, but pictures were taken, so there’s that.

Do you know, when we got done with each session, not one person asked how I intend to vote next Tuesday in our local elections? I did have a woman stop by the house Sunday afternoon to give me a flier and tell me who she hoped I would vote for in relation to the Board of Trustees for JCCC. I’m o.k. with that until she began to speak negatively about whom the person was running against – I don’t particularly like negative campaigning anytime, but certainly not on the Sabbath. So I walked her to my door as she was talking, and as she realized what I was doing, she looked at me and shared that she doubted I even voted when elections came around. Do you WANT to wave a red flag in front of an exhausted pastor on a Sunday afternoon whose passion for Jesus is primary, but who secondarily is so passionate about voting because I know the sacrifices women before me made so that I could vote safely and without prejudice??? Women were beaten and thrown into prison for my right to vote, and you’re going to assume because I don’t want to hear you speak negatively about your candidate’s opponent that it means I don’t value voting?!!? So she and I had a little more conversation on my front porch where I did share my particular understanding about trying to live like Jesus and part of that means being respectful and recognizing the sacrifices made by women and men alike for our right to be in CIVIL discourse about our differences in understanding but does NOT include attacking someone’s gender, age, or right to put themselves forward as a candidate for a political position simply because they are opposing your own candidate. And that yes, I WILL be voting, thanks for asking. It was probably good that Session 2 of goat yoga was the following Thursday.

I digress – surprised?!!? snort So finally one of the best parts of goat yoga happens after it’s over if you hang around. The lead goat wrangler and her assistants do what I call the “running of the goats” sorta like the bulls in Spain, only different, where they run the baby goats back to the barn from the yoga field. It has to be one of the cutest things ever! To see those little but loud goat toddlers running down the sidewalk following the pied-goat-piper with the bucket of treats, and then watch as one or two of them lose focus, as all toddlers will do now and again, and decide to veer off to the right or to the left to see what the world looks like in a different place, because you know, the grass is always greener. Finally not one goat was left behind, hmmmmm, another sermon for another time I suppose.

We’re in the final two weeks of summer break before school is back in session, I know some of you have already started back, but let me encourage you to find a place of joy. Be grateful for civil discourse which may include disagreement. Remember those who’ve gone before us and made sacrifices for our right to vote. AND VOTE! And remember, at least at Deanna Rose Farmstead, no goat is left behind!

The video below of Pickler and Ben trying goat yoga is what it’s like!