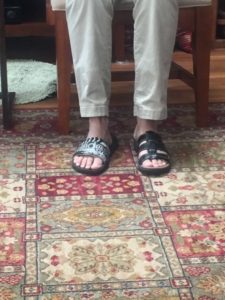 Last Thursday morning I was on my way to one of the home meetings with the pastor we are holding throughout the summer, and I realize as I’m turning into the driveway of our wonderful hosts, that I donned one publicly and professionally accepted sandal and did not the other. I love my slides, they are spongy and waterproof and make me so happy, and I wear them every morning to do all the stuff of getting ready for my day. They give me happy feet, and if my feet ain’t happy, ain’t nobody happy – that’s not exactly how that goes, but it works for me. The only thing I could figure out with the above situation, is that my mind was evidently distracted between taking one slide off and donning my public sandal footwear and removing the other slide to don the other sandal. I might like to say that I was suddenly struck by the Holy Spirit with a ready-made sermon so that I didn’t have to worry about it going into the weekend. I might love to say that I had a sudden revelation of how to resolve the humanitarian crisis at the border. I’d be more than pleased to say that it suddenly occurred to me how to move the United Methodist Church into being United again without anyone being mean to each other anymore. It would make me happy to say that I completely lost all anxiety, worry, consternation, frustration, and stress around any and all of the above-mentioned subjects, but alas, none of that was the case. I simply think a bit of my self-diagnosed ADHD was in full-force and I simply lost focus in terms of my footwear. I have worn a black pump and a navy pump before – but that’s always been related to my need to buy several colors of the same shoe when I find one that fits well. I really haven’t ever worn two quite different shoe styles without realizing it until arriving at an appointment.

The group from Grace meeting that morning was quite generous and experienced no small amount of entertainment in my footwear faux pas. And it generated a few stories of other similar situations that illustrated our common humanity in ways we sometimes forget. We all share some level of trepidation that something will happen that will draw attention to ourselves in less than positive ways. We stumble and fall and, often without hesitating to see if we’re injured, we jump up and look around to see if anyone noticed. When our phone makes a noise in a public setting we’re never sure whether to reach it to silence it or let it go pretending it’s someone else and stare at everyone just like they are staring at us. There is something in us that wants to be seen but only in our best moments, or at least what we judge as our best moments.

I was a huge watcher of “Friends” sitcom back in the day. I thought and still think it was one of the most well-written half-hour shows that t.v. has produced. In one episode, Monica is having a conversation about how critical her mother is and how, when she was growing up, when she would make a mistake, or her brother Ross the more favored would make a mistake, her mom would say “well, you just pulled a Monica.” In this episode catering a brunch for her mother, she realizes she’s lost a fake fingernail in the quiche, tells her mom, upon which her mom shares she wins the bet with her dad, that she’d “pull a Monica”, and pulls two lasagnas out of the freezer having prepared for Monica to mess up. Later in the episode Phoebe reframes the phrase “pulling a Monica” to mean what happens when Monica does something strong and positive and good for the world, and that maybe when she does those things, she can tell herself she’s “pulled a Monica” and it will be a phrase of courage and confidence.

I know changing the language we hear from ourselves about our weaknesses, faults, failures, and mistakes is hard to ignore and even more difficult to change depending on how long we’ve heard it from others and assimilated it into our internal being. To get started the bottom-line question is whether we want to change it. We may be used to that tone and content that, as perplexing as it may seem, somehow comforts us. If we continually convince ourselves that we’re likely to mess up nearly anything we try, we may decide it will make us immune to being disappointed in ourselves when we do, because we were already expecting it. When you see that out loud, and I do mean see it, not say it, it looks sort of funnily icky. Why would we think that way we might wonder, and yet we know sometimes we do. The question is, do we really want to? Or might we risk changing that expectation, that language, that picture we’ve formed that, at least in God’s eyes, is as distorted as we look when seeing our reflection in a funhouse mirror. We don’t have to see or hear or understand ourselves that way, we really don’t! There are other options. It takes work, a commitment, a willingness to risk vulnerability that we will still make mistakes and we can take responsibility for them, and yet survive and thrive and not let it be defining of our whole self.

At some random workshop I was in many years ago, we were asked to write a letter from our current place and age and chapter of life to our younger self and we could pick the age of that younger self. We were to literally see a picture of ourselves at that time and ask ourselves what we would want that younger self to know or hear from us having lived through the intervening years from that age to the age we are now. At the time I underestimated the power of that simple assignment. To remember what we worried about as young selves – upper elementary/teen years. How complex our emotions during our development. The power of the picture we formed of ourselves that came from whether we believed we “fit” or didn’t in whatever standard we assimilated from the world, our peers, and whatever places of input from which we were receiving information. What would we say to that younger self now? What would we say to allay their fears, to ease the burden of fitting/not fitting, to better lay a foundation that we are beloved children in, with, and through the challenges of forming an identity and claiming our worth? And, what might that younger self have to say to us? That wasn’t part of the assignment, but because I have never been able to leave things as they are, my next interest was just that. What would my younger self say to the person I had become given the intervening years of life and experience? What would she say to offer hope after having experienced struggle and hardship? What would she say to offer peace in the midst of the truth of unfilled dreams as well as the dreams reached and surpassed? What would she say about the picture painted of our self over years of living and loving and serving that have gone better and worse depending on the day and hour and people and changing of seasons?

I still have those letters from that assignment from that random workshop from years ago. The discoveries were a bit astounding to see on paper. I intermittently go back and find it, simply to be reminded that sometimes what I assume or take for granted as factual reality about the self, is not always so much fact or reality. When I gain perspective and can think more broadly, it is amazing the sense of freedom it often brings.

Amazingly (tongue in check) my lack of matching footwear did not stop the group meeting from wonderful conversation and meaningful interaction. It did not block relationship building or sharing our challenges and hopes and dreams for the community of faith at Grace. I was still allowed a cup of coffee and to pet Gibbs, the cat, who made his presence as much a part if not the center of our community as any of the rest of us. And, by the way, cats seem to have no problem with a high understanding of their own belovedness and the deserving of good things without necessarily having earned it. And in the midst of being, once again, a perfectly imperfect human, the chuckle it yet brings reminds me we are probably more alike than different – and that may finally be, in God’s eternal love, our saving grace