A friend of mine’s niece and nephew recently retired to Durango, Colorado. I asked her how they were liking it, and she said they love it. They raised their daughters there before jobs took them other places, so they know the seasons and what to expect in winter, AND they are making the most of the spring and summer with almost daily hikes and outdoor activities that we flatlanders can only travel west to experience on short vacations. While they aren’t natives, somehow the area seeped into their bloodstreams leading to choosing it for their forever home. In recounting a recent hike, their Aunt said she had a picture of one of the challenges hikers in the area face: 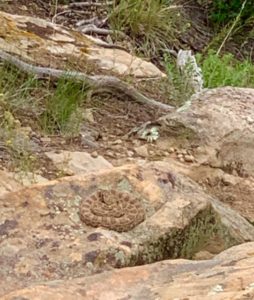 I know, right??? This is not a computer generated or photo-shopped portrait! They actually saw this as they were hiking a few days ago! Two questions – how big is that particular Timber Rattler, and how in all that is blessed of God did you have the wherewithal to stand there long enough to take this PICTURE?!?? Timber Rattlers are one of the most venomous snakes in the United States and this one has, by size alone, obviously been around the block more than a few times and survived. He’s clearly large and in charge and I can’t imagine the venom that resides in the glands connected to his fangs! Why yes, I do know a fair amount about this because, while not quite a phobia, I am fascinatingly repelled by all things snake. And this is a big one, clearly not in a zoo behind shatter-proof glass, clearly not being wrangled to move into a different part of the wilderness, and clearly not interested in moving from his coiled comfort on this warm rock! You know what my Dude always says, where there’s one snake . . . so was the partner farther up the trail, hiding behind the scrub brush and/or other flora located in the area near where you might be stepping??? AND were you wearing fang-proof over the knee boots???

I think I’m not planning on retiring in Colorado. Not only because Timber Tom the tough-minded rattler would probably be waiting just for me and would smell my fear and paranoia, and likely, though uncharacteristically, attack an innocent human walking by. That might be an element of my decision, but probably more because since I didn’t grow up there, it still gives me a place to vacation that makes it more a destination than an every-day lifestyle. I’ve always loved the Sangre di Cristo Range in the more southwestern part of Colorado – the vistas seem more expansive and the roads less travelled. I say that after not having been there for probably 10 or 15 years – maybe things cloud in my memory a bit. One summer after having driven the “Million Dollar Highway” between Silverton and Ouray, which I absolutely loved, I realized the person in the car with me was way not as taken by the steep drops, the sheer rock face and the sometimes seemingly narrow and getting narrower two-lane road containing passing trucks as well as long RV’s and a few motorcycles and sports cars. When telling my parents of the two different experiences that two people in the same car had, my mom recounted my dad taking her on that road back when it was not even paved, and as I remember it, having to back up a few times in order that other vehicles might pass. In both cases there may have been some tears and the threat of breakfast being a repeat experience, only not so pleasant the second time.

We’ve hit the middle part of summer. 4th of July may not be the formal turning point, but it certainly has that feel to it. Vacation Bible School is over, we’ve started our backpack give away collecting so that in a month we can bless them and share them with students preparing to return to school. 3 of our 4 student mission trips have returned and Friday the final one for our high school juniors and seniors will leave for Costa Rica. Two weeks after their return will be youth week and two weeks after that the first day of school. Sorry educators, and you’re welcome parents, for mentioning that! snort Where are we in relishing the present moment God has given as a gift to encourage and invite a refreshing of body, mind, and spirit?

A dear friend, I think sometimes a sister by another mother, recently returned from a wonderful trip and presented me with a bracelet the inside of which says, “for such a time as this.” All you bible scholars know that verse is from the book of Esther, one of my favorites. For many of us, this particular season in the life of the church has been heartbreakingly difficult. Our denomination that has been, by most all estimation, forever on the frontlines of fighting for the least, the last, the lost, is being torn apart by a lack of agreement about who is worthy to include in that group for our day and time. Honestly, there have been times I’ve been close to giving up, giving in, and getting out. I’m old and getting older, recovery from planned and unplanned physical setbacks takes longer, and somehow tears come way more easily around living in and with the hurting and sometimes the helpless than ever before. I seem to deal with pressure more and less effectively and I’m not ever quite sure when the more and less of the effectiveness is going to be the case. I was visiting about these very things with this sister-by-another-mother not long ago, we’re around the same age, and she said what if it’s for such a time as this that you are in this place? REALLLLY??? Isn’t it so confounding when someone else’s wisdom and truth-telling reminds you that maybe you don’t have a corner on knowing everything – even where bible stories and particular verses are concerned? snort I suppose I was reminded that God has envisioned the future for us as individuals and as faith communities, and our “response-ability” is to live into that vision in as whole and healthy a way as possible that we may best and most lovingly serve, even and perhaps most importantly, in times just such as these.

So I hope like you, I will enjoy, encourage, and invite moments of refreshment and rest in this middle-of-the -summer season. I hope to lay aside the cares and concerns in sacred ways, for a time, and breathe in the power of the Spirit that reminds me that our cares and concerns are already known and carried by the one who knows and carries us in every way and place. I will carry with me Timber Tom the unconcerned large and in-charge rattler living near Durango and rather unconcerned with the humans hiking by. He perhaps rattles a fair warning and continues his comfortably coiled sunning – life ain’t so bad, he may be saying, as long as we stay in our own lanes, respect each other’s existence, and every once in awhile, live a moment resting in the sun.