2019. Does that look odd to you? I’m still getting used to it. I’ve never really been a “big” year or “big” day recognizer. I found that when I would prepare myself to experience some kind of intensity around an anniversary date of something, it wouldn’t particularly be that day that would hit me, but either the day before or the day after or sometimes even a random day a week or two ahead or behind the actual named and known date. Maybe it’s all the years preparing sermons for Christmas Eve and Easter, at least for this pastor, the actual arrival and start of the services is a relief because there is no more time to prepare or worry or change or re-write or read one more reference or think of one more illustration that would be better than the other hundred illustrations you’ve written and tossed and reworked and wandered into and around until it feels redundant. It’s the weeks and days before “big” days that hit for me.

2019 is a bit like that. Next year marks the end of one decade and the beginning of the next. Ten year segments mark the census, the “natural” time to reflect on where we started and where we’ve reached in the journey of the teens of the 21st century. We’ll see all sorts of decade reviews of personalities and politics and economic changes and population and state, national, and global happenings. So what do we do with the year before, this odd series of numbers that don’t quite roll off the tongue or out of the pen so easily?

For the United Methodist Church, this year was named on the timeline as the marker to how we would define our “Way Forward” in the midst of the struggle that may not be so much about the “named” issue of acceptance or not of LGBTQ in our congregations, but if we can reach a place of respectful disagreement and remain one denomination. We stand a little over 10 days away from that “big” meeting, and most of us are still wondering what the future will hold and praying that it will be what God envisions for us and for those who have yet to enter our doors. It is no secret that I support the One Church Plan which, while not perfect by any stretch, allows clergy and churches to follow their collective and individual conscience on how to live out the love of God and the love of neighbor as ourselves. It removes the prohibitive language regarding the unacceptance of our LGBTQ brothers, sisters and neighbors in our Book of Discipline which governs the polity of the church, and thereby removes the need for formal charges and church trials for “dissenters”. The only trial Jesus was a part of in relation to his willingness to invite the “outsiders” to be disciples ended with his crucifixion. I don’t think it’s a particularly good witness for his disciples to continue believing trials will finally solve all our problems of disagreement nor to extend spiritual or religious crucifixion to those with whom we disagree. Again, I’m guessing none of you who know me are particularly surprised by my perspective or probably the intensity of my language around it.

2019. Not 2020. Not the nice round number that clearly marks an ending and a beginning as does a decade. Is it a shadow number? Does it stand in the shadow of the truly important and defining time of our life?

Today is February 13, not February 14. It’s last minute day, right? Tomorrow is the day to celebrate all that is romantic and heart-sey and flower-sey and cand-sey and maybe gems and precious metal-sey, you know, just in case you were the one that was supposed to make the dinner reservations at that place where you got engaged and now they’re booked and you have to try and make it o.k.? In 2010, Amy Poehler’s character Leslie Knope on the sitcom Parks and Rec. named this day “Galentine’s Day.

“Oh, it’s only the best day of the year. Every February 13th, my lady
friends and I leave our husbands and our boyfriends at home, and
we just come and kick it, breakfast-style. Ladies celebrating ladies.
It’s like Lilith Fair, minus the angst. Plus frittatas.”
-Leslie Knope, Parks&Rec, SO2E16

I think her often ironic and grains of gritty truth style humour meant for us to reflect on the strength of relationships beyond the expectations of the romantic. That perhaps, in my words, the love of God with which we are created is about sharing on more than one day a year and is less about perhaps unreachable and sometimes unrealistic expectations of capturing everything perfect about love on one day. The interesting thing is that this odd and rather unexpected “thing” from a sitcom has caught on and has taken a life of its own. It invites a recognition that love has meaning beyond the romance of one day and perhaps in reality has more to do with how we live as friends in the every-day ups and downs of life given the peculiarities we each have as wildly imperfect human beings. I did not go to breakfast with any friends this morning, but I am grateful for all of you who reach out and walk together in love and friendship through this most complex and messy life!

February 13, 2019. Maybe it is the oddest of all days, dates, and years we might imagine right now. And in the midst of a winter of polar vortex, at least in Kansas it will be in the 50’s – truly a reason to go outside and celebrate! It is an oddly wonderful day and an oddly important year to build a foundation for a future filled with hope.

A last thought. I said goodbye to my old friend Bud in these recent days. He got pretty sick pretty quickly without much to be done but comfort. The cats and I miss him fiercely and I believe that all dogs go to heaven so he’s simply running on the paths with big energy in a new place without time or leashes to limit and that brings everso much joy in the midst of still a few tears. He so often was my minute, and often more than two, of grace! 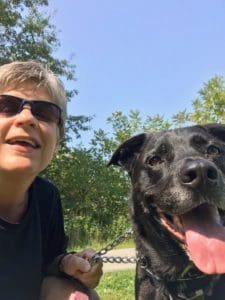 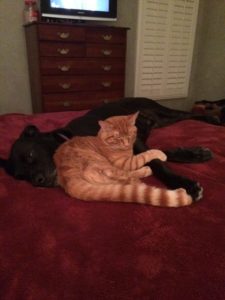