If we go with the story the way we’ve interpreted the timing over the past 2,000+/- years, they’re on their way to grandmother’s house for the first Christmas. It’s pretty simple really, when the Roman Empire said it was time to go back to the place from which you came to be counted for taxes, you went back. It’s not particularly a convenient time. It’s late in the pregnancy that had an odd beginning the first place, and now to be travelling, even if it did mean seeing family that you hadn’t seen for quite awhile, simply wasn’t convenient. Their schools hadn’t started letting out a few days early, workplaces hadn’t posted “holiday hours”, tickets for skiing or Walt Disney World or South Africa weren’t available for purchase, and matching Santa jammies weren’t yet on the shelves. In fact I doubt anyone has bought any presents other than the three guys on camels that have spotted a star beginning to rise in the eastern sky. 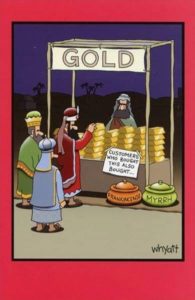 Nope. All that they knew was that they somehow had to get to Bethlehem hopefully before the baby came so they might have family and maybe some old friends who could house and help support them in the first hours of being new parents.

Some of you probably remember the last few days before the birth of your first child (maybe walking or a donkey ride might have sped up the process?) and then the first hours of being new parents with a rather fragile life thrust into your arms relying on you for their very existence and survival. The mix of relief and joy and anxiety and awe and overwhelming wonder and a little worry and feelings of adequacy and inadequacy and a whole lot of other stuff all rolled up into one as the tiny life took the first breaths and kept breathing as each minute passed. As the story goes there was no doctor or nurse or birthing room or home delivery – it was a stable and a manger and a likely cave beneath or beside a home which was where animals were often kept. Many of you know so much better than me the direct experience of new birth. All of us alike can only imagine what it was beyond our reality in that day and that time with those challenges in that setting. And given all that and our adequacies and inadequacies and fears and tremblings and braves and courageouses and anxieties and doubts and confidences and wonders the child lived – he simply kept living in the inconvenience and the odd timing and the Roman Empire and the religious establishment and the however-they-came voices of messengers to Mary and Joseph and the Shepherds – he simply kept living.

What is different because of us? Because of you? Because of me? Some things are better. Some things are likely worse. Relationships have been built that last. Relationships have been built that don’t so much last. Work has been done unlike anyone else could have done it. Other work has fallen through the cracks because no one else could do it and we didn’t. Laughter has happened until it brought tears to our eyes, and tears have happened until it brought healing to our sorrows. Disagreements have polarized us and moments of reconciliation have humbled us. And the world’s capacity for love has been exponentially expanded because the image of God is born in each and every one of us, no less than Jesus.

So we celebrate. And I believe the school children and teachers will be free this afternoon. And travelling to a Dr.’s appointment this morning the traffic on I-435 was smooth and, though not sparse, certainly waaaay less than normal. And houses and neighborhoods are filled with blinking lights and air-filled Santa’s and Reindeers and someone right outside my office is whistling the song “What Child is This” – not even kidding right now, and they are doing it over and over and over again – not that I’m at all bothered by it . . . And perhaps our humanity is more starkly apparent in these last few days leading up to the birth than any other time of year. Because we’re on our way to our own Bethlehem birthing experiences – some inconvenienced and unprepared, others bearing gifts from miles and miles away, others wishing they could just ignore the whole thing and move on, still others wondering why this year will be any different than any other year, others filled with wonder and excitement and a spirit that cannot be completely explained. And because of and perhaps in spite of how we are, God continues being born and breathing and living in and through each life that enters the world in whatever way and however long it lasts and somehow, I honestly believe for God, there is the essence of joy in the very act of creation in each, and yes, every life.

I hope you find a place and way and time to worship new birth that is authentic and true for you this year. And I hope that God blesses you with the gift of an awareness of the special nature of your life, and I hope, of course, that you may particularly have a minute or maybe two, of grace!