That’s a message I evidently want the world to know today, or maybe that I want me to know today. We’re not done being United Methodist disciples following after the way of Jesus. We’re not done being strong women and men with diverse perspectives and experiences and opinions on the way the world is. We’re not done being citizens of a democratic republic that was not built on hate and exclusion but on new opportunities to exercise freedom and the belief that we are created equal. We’re not done being citizens who vote our conscience and our integrity even in our disagreement. We’re not done learning about our differences together, even on our staff at Grace – Colombian, South Korean, North American, Mexican; 20’s, 30’s, 40’s, 50’s, 60’s, and 70’s; male, female, married, single; former teacher, lawyer, nurse, medical tech., HR, business admin., CPA, military, travel agent, opera soloist, law enforcement; from Texas, California, Tennessee, Oklahoma, New York, Wyoming, Missouri, Mississippi, Pennsylvania, western Kansas (it is a whole other country); graduates of BAKER, UMKC, University of Missouri, Duke, Mid-America Nazarene, KU, Benedictine, K-State, KCK Community College, Central Texas, Wayland Baptist, Drury, Tennessee Tech, Rockhurst, Ottawa, FLETC (Federal Law Enforcement Training Center), Philippine Christian University, St. Paul, Wesley, Garrett, and the School of Hard Knocks and Heartbreak (not saying which staff member told me that…) We’re not done standing up to hate with love and justice; standing up for those who are bashed and bullied; standing with those whose voices disturb our comfortable privilege and illusory sense of inclusion – “just not in my neighborhood”. We’re not done wrestling with God’s Spirit through the night and hanging on for dear life for a blessing that may change our name from independent individual to interdependent need-er of forgiveness and grace. We are not done being smilers at babies, lovers of sunsets, and admirers of wisdom and depth that may come with the long-lived who have been hurt and healed more times than we might imagine. We are simply not done being called by God to love with urgency, with generosity, without limits, with determination, in the face of meanness and persecution, we are not done being called by God to love.

The video below is from an exercise that originated in Denmark and was picked up and re-interpreted by NewHope church in Houston, TX. Interestingly, while the theology of this non-denominational church is quite different than a mainline faith community like Grace, I find this video a clear place of connection. And the pic of Bud and Ringo is simply a de-stressor. 🙂 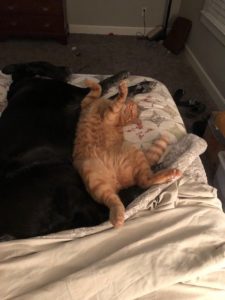