What do you hang on to most tightly? The safety bars of a roller coaster? The hand of your toddler when you’re crossing the street? Political opinions? The dream of a better world for your grandchildren? Your car keys, purse, wallet, CELL PHONE? The promise of a better mouse trap? The possibility of the Chiefs making the Super Bowl? Jesus returning before the credit card bill is due? The possibility of your pastor ever preaching a short sermon?!!?

I went home for lunch on Monday and the sun was shining and the leaves were blowing and I went and yelled for Ringo to come to the house. He came out from under one of my shrubs, his teeth clenched tightly around the tail of a still-squirming chipmunk. I did not know we had chipmunks in Johnson County. I’m used to the usual fare of mice, rats, an occasional snake, voles, and various birds, but had not seen a chipmunk as part of Ringo’s catch and release program. But there it was, seemingly little worse for the wear other than his tail being gripped tightly in the teeth of an orange tabby.

I ordered Ringo to drop it. He’s a cat. He didn’t. I picked Ringo up and repeated the command to drop. He was still a cat. He did not. Then I decided to shake him up and down, sorta like you might shake a child by their feet if they’re choking? That’s probably not what you do, but they showed that on “Young Sheldon” a few weeks ago. Just as Sheldon did not cough up any objects, Ringo did not loosen the grip on the squirming rodent tail. So yes, this is true, I reached around Ringo’s head and grabbed the part of the tail closest to the animal’s body and jerked it out of Ringo’s mouth and “gently” tossed the chipmunk several feet away where it landed, a bit stunned for a moment, and then scurried toward the fence. Ringo squirmed in my grip but did not claw me – rather, he let out a yell which I interpreted as his sharing of offense at me lightly tossing away the present he expected to bring into the house as his part of Thanksgiving. He got over his anger as soon as I re-filled his treat bowl.

I’ve been thinking repeatedly since then: what do we hang on to most tightly? The steering wheel when someone suddenly cuts in front of us and we have a close call? The cell phone when our conversation is heated and intense and leaves us stunned? Our need for security in a world that feels about as insecure now as it ever has? The hand of the person we love most in the world as we wait for news, as we experience the contractions that lead up to and through childbirth, as we say good-bye?

I have a tendency to hang on to old t-shirts and sweatshirts pretty tightly. The more you wear them, the softer they get. I have some that I will never be able to wear again, too many washings and dryings that have caused shrinkage, or too many chester cheese curls that have caused expanding, but I can’t seem to let them go. I have some that have paint stains, rips and tears, the neckline and cuffs frayed with wear, but I hang on to them most tightly when I’m sorting through to donate other items. I just can’t seem to let them go. Most of them have the names of places I’ve been – vacations, sporting events, golf courses, BOWL GAMES – the year of the Cotton Bowl when we should have been playing for the national championship…

Somehow the “stuff” we hang on to most tightly often has value to us beyond what anyone else might see. You know the question: if your house was burning and all your loved ones and pets were safe and you could only grab one thing, what would it be? An old photograph of your grandparents or your wedding album? Your child’s first pair of shoes or kindergarten grade card? That box full of old letters? The family Bible? The painting on the wall that your grandma did when you didn’t even know she had ever taken art lessons?

We sometimes wonder about the “meaning of life,” and believe that is supposed to be this grand and complex and mysterious and mostly hidden idea or vision or key or answer that maybe only a few people get and even if they do they’re not telling. What if it’s not that? What if meaning in life is about experiences and successes and failures and consequences and tourist traps and time and gifts and food and water and sometimes wine and views from the top and views from the bottom and speeding up and slowing down and resting and running and idling and speaking and listening and gut instincts and data-driven information and all of that and more because finally, if that list has meaning it’s about you and the people with whom you have done all those things – people with whom you have connected in life at different levels at different times and different seasons. 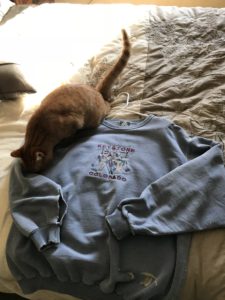 So I have this one Keystone, Colorado ski resort sweatshirt that I still wear. The neck and cuffs are completely frayed apart, the seam on one of the sleeves has disintegrated part way up leaving a bit of an “attractive” slit, it’s stone-washed denim blue with three skiiers on a chairlift sewn into the front. It reminds me of the first time I ever went skiing and it happened to be with my sister and bro-in-law. I considered myself quite athletic, but I spent the first morning falling down and getting up and falling down and getting up and falling down and getting up and… I WAS MAD! I was tired and sore and did NOT want to listen to the possibility that if I would stop being scared to actually go down the hill and stop trying to ski up it, life would get a lot better. My bro-in-law “claims” he heard me use less than Jesus-appropriate language toward him. When it was time for lunch we happened to be at the top of a slope and I announced I was going to quit. As soon as I got to the bottom of the hill, that was it. It wasn’t fun, it was the stupidest sport ever invented, and I didn’t know who they thought they were, but people who loved me would never have suggested I come with them and then treat me so cruelly as trying to make me slide down a mountain on two pieces of plastic that simply cross over each other causing innocent people to fall down and have to get back up while other people are trying hard (or not so hard) not to laugh at them. From that point on during lunch I refused to speak – I thought it apt punishment, although I’m guessing they considered it a welcome reward.

We went back out after lunch and put on our skiis, I was still hanging on to my mad so tightly, I decided to ski away from them and come down the hill by myself on a different path. While I was busy fuming about their lack of sensitivity and compassion regarding my physical and emotional pain, without really realizing it, I was skiing and rather fast and it was, well, fun. And I started making long turns and short turns and even tried a little jump… yeah, not so much, I wasn’t that good. When I got to the bottom of the hill and found my “instructors” they claimed to be terribly worried about me, and I told them what they had done had finally worked, and that I was thinking about moving to Colorado to be a ski instructor.

So I still have the sweatshirt, and I still wear it when there’s no one around to tell me not to because it’s in such bad shape. See, it reminds me that sometimes hanging on to something too tightly – fear of going downhill, and the conviction that people who love you are out to get you *wink*, or that trying something new isn’t worth the learning curve, or that not being good at something means you should quit, or that falling and down and getting up is simply too hard, or that being tired and frustrated is unresolvable – it reminds me that, paradoxically, learning to let go is sometimes what keeps you hanging on. I know, right? And that probably the most valuable part of learning is the people who walk beside you, helping you let go of that which you don’t need and doing their best to refuse to let you give up.

What do we hang on to most tightly? Might it be time to let it go? What would happen if we did? It might be worth the risk. A chipmunk found a second chance at life, and a stubborn orange tabby wasn’t any worse for the wear, and an old lady in a worn ski resort sweatshirt is still hanging on and every now and again risks trying something new and more often than not comes away with a sweatshirt to commemorate and add to the pile that one day she’ll decide to let go – or maybe just hang on to a little less tightly?