Buddy and I decided to go for a run after work on Monday. It didn’t really feel like there was much else I could get done. I had other stuff sitting in my Queue, (I think that’s the latest trendy way of talking about the list of things waiting for your attention and if I’m anything, I’m trendy, *snort*) so I had other stuff sitting in my Queue but I had no focus, no mental or emotional energy, and no particular passion for thinking my way through or processing the news of the day. So Buddy and I decided to head out on the path for a run.

I don’t really like the first mile of running very much. My mind and body are not really in sync, my breath is labored and Buddy is all over the place from one side of the path to the other, stopping and going, *snort* sniffing to the point of nearly hyperventilating. During the first mile especially, I’m quite clear that Buddy would never make a good search-for-escaped-prisoners canine; I think he has a little ADHD as he can’t quite stay focused on any one thing, particularly our task at hand. Or maybe I’m projecting?

So we hit mile two and everything got better, we hit a rhythm and a stride and there was enough breeze to make it pleasant but not so much to slow us down. There were folks out on the path biking and running and walking and talking and looking at their cell phones, which I find a bit amusing, and laughing and sitting and even some boys fishing in the creek – I imagined that one of them was named Opie. Once we hit a rhythm and came to the place we normally turn around, I decided not to because it simply was feeling too good. Bud gave me a backward glance – he’s such a creature of habit – but once he realized we were charting some new territory, he was all over it. We went on for a while because somehow being out and away from the news and social media and images and opinions and stories and aftermath and videos being played over and over and over and over again allowed me to breathe, simply just to breathe deeply and rhythmically of life and beauty and regular people doing regular things on a regular Monday night. 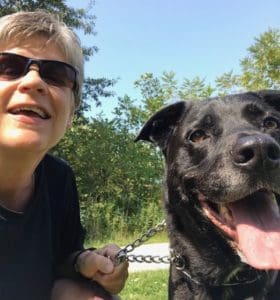 So Buddy and I decided to go out for a run and decided to run farther than we normally do and decided as the sky began to deepen toward sunset that maybe we needed to turn around and decided that maybe we’d run our legs to a point where we needed to walk for a while. We turned around and started walking, and coming toward us was a young couple wearing Royals gear pushing an empty stroller with a little blonde curly-headed girl child, I’m guessing about 18 months, in Chiefs gear who was toddling rather unevenly everywhere but on the path. Kind of a Buddy-behavior in the first mile. She sees Buddy and begins toddling toward him squealing I think the word doggy, doggy. The mom looks at me and I tell her it’s fine. And this little girl runs up to him and throws her arms around his neck, still squealing, and Buddy does his best to find a way to turn and lick her – he absolutely adores licking friendly people. She backed up to squeeze his nose and pull his ears and he just kept licking and she kept laughing and then in the blink of an eye she looks at the sky, squeals and says MOON! And she was off to try and chase the moon that was rising. I looked at her mom and dad, who shook their heads and say that every night she has to find a window where she can see the moon to say goodnight to it before she goes to bed. The mom is rolling her eyes and there was something else rolling out of my eyes, maybe just a little bit, maybe it was allergies, maybe because it all is simply too much. I want that child to always want to hug big old black dogs that are triple her size. And I want her to chase the moon and say goodnight to it every night. Without. One. Worry…about semi-automatic turned automatic weapons and amassed arsenals of ammunition. That’s what I want, and that’s what I want every one of you out there to want as well, I’m just selfish that way.

As the pictures below will show, (because of all weeks, this is a week we need to see cute cats and dogs) if big black dogs and ornery and arrogant orange cats can live together peacefully, maybe why can’t those of us with opposable thumbs do the same? Just askin’.