There are things in life that intrigue me, that catch my imagination, at which I marvel at their very existence, and today… it’s WD-40. 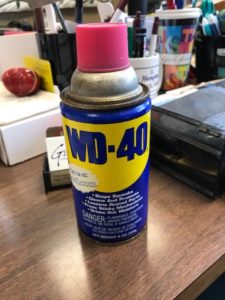 I had this squeak in my gate leading out my backyard to the running trail. Actually, it wasn’t as much a squeak as a screech. I felt bad, most particularly on Sunday mornings when Bud and I go out very, very early, that my neighbors were probably not having happy Jesus thoughts about the pastor next door on the Sabbath because of the screeching gate. Not a great tool or witness for invitational evangelism, I’m thinking.

And then I remembered. I remembered my Dad’s workshop and tool shed that sat out north of our house on the farm. The tool shed had EVERYTHING! Of course there were hammers (sledge, ball pine, and claw) and screwdrivers (phillips and non-phillips), and vice-grips and bolt-cutters and rolls of barbed wired and rolls of wire for electric fencing and the poles, and the quirky little doo-hickeys that went on the poles for the electric fencing. And yes, I believe it was my sister who dared me to touch an electric fence the one and only time I did it on purpose. There were boxes of every size of nails and nuts and bolts and screws and washers, and pliers (needle-nose and bull), and allen wrenches (not sure if we had any Frank ones *snort* a little self-entertainment there) vice-grips and axes (long and short-handled). There were tubes that fit into a lube-gun that Dad used to push gooey stuff onto different bolts and levers and bendy-things on implements and tractors and combines to keep them running smoothly. There were nails hammered into the wall on which hung all sizes and lengths of belts and hoses and chains (log and non-log), and drawers with spark plugs and filters and batteries. And an old orange air compressor which, when plugged in, made the loudest noise ever but allowed me to fill my basketball with air so it would bounce again for a while. The cockleburs and stickers around the garage on which our basketball hoop hung killed many a basketball being bounced over the years. And along one wall of the tool shed, the most exotic machine of all – the welder. It was a big blue metal box with a set of dials toward the top and a hose or cable of some sort that coiled around a holder on the side when not in use. It had the best mask perched on top of it ever! It was black and had a small glass rectangle in the front that was so dark greenly-tinted that you couldn’t really see anything through it. It was really the essence of Darth Vader, “Luke, I am your father,” before Darth was even a thought on George Lucas’ mind – sequel, prequel, or original!

Somewhere among the tools and hoses and masks and machines there was always, ALWAYS, a can of WD-40 AND a roll of duct tape! Because, really, if you boil everything down to the essentials, duct tape and WD-40 are really all you need, right? I might have caught my mic wire in my doorlatch two Sundays ago running out of my office for the 10:45 service and guess what? I duct taped that baby up and it’s still working! The binding on my Bible from high school? Being held together by duct tape! One of the loose parts of the grill on my car where either the woman backed up at a green light and hit it, OR “allegedly” I might have tried to help her through the intersection a little faster than what she was choosing to go? It’s still attached because, duct tape! Even our new CLUB 45 for our kids in grades 4 and 5 are having their kick-off event this Friday night and the theme is: Duct-Tape Mania!!! Each kid is bringing a roll of duct tape for crafts and games! Would that not be the most fun ever?!?

But today it’s all about WD-40 because… I found mine! I don’t have a tool shed with all the great stuff from the farm, but I do have a tool box and I have WD-40! I can’t remember when I got it (‘tween you, me, and the tree, I might have absconded with it from my Dad’s garage one time when I was home and he wasn’t looking), the can is clearly old and well-used, but I found it! And I’ve been WD-40-ing stuff that has squeaks, rusty stuff that no longer turns, and maybe even stuff that isn’t rusty and doesn’t squeak but might someday. Somehow there’s a tremendous feeling of satisfaction when a belligerent rusty hinge suddenly moves smoothly and freely without screeching. My neighbors may not yet realize it, but their Sunday morning world has just been transformed from the annoying o’dark early sounds of the pastor next door to perhaps deciding to visit that church she loves because she fixed the hinges on her gate!

Oh, if it were only that easy, right?!? Honestly, some days I want to believe that some things that are naggingly, annoyingly, chronically and screechingly real in the world could just be fixed with a roll of duct tape and a spritz of WD-40. Or a single conversation and a quick handshake. Or a short apology and an easy forgiveness. Or a let’s just agree to disagree and go on our way. Or a pull-yourself-up-by-your-own-bootstraps and just stop whining, or kneeling, or doing anything else that makes us uncomfortable. Or a willing suspension of reality so we can believe that we’re all on a level playing field and everyone has the same chances and opportunities as everyone else because race, or gender, or age, or sexuality, or religion, or economic class doesn’t matter.

How did I get from my Dad’s tool shed to this?

Let’s think about it. I may want to believe that Duct tape and a can of DW-40 fixes everything. If that’s true, then why did my dad have all that other stuff? Was he a collector? A hoarder? Addicted to the tool time part of QVC or a member of Amazon Prime? (No worries, Dad, I know you don’t really know what either of those are *snort*) Or maybe all that stuff was a calculated farm expense that allowed him to maintain and sometimes fix the necessary equipment himself for the longer-term return of longer-lasting use. Were all those tools necessary every single time? Not so much. But when they were truly needed, were they invaluable? Absolutely.

Why do we have a Peace Academy teaching children and parents about race and class and poverty and ways of peaceful resolution to conflict? Why do we have Life Groups connecting and supporting and learning with one another around family, scripture, theology and mission? Why can’t the preachers simply talk about the Bible instead of insisting on bringing in conversations about social, economic, racial, and even political and religious issues? Maybe we need more tools in our tool boxes. It doesn’t work to pretend that racial injustice and tensions are everyone else’s problem. Or that religious differences wouldn’t cause war if everybody just believed the right way which just so happens to be our way. Or that we can define human beings as statistics, categories, and objects determined by the group with which they are labeled.

We human beings are complicated, complex, ornery, maddening, frustrating, strong, brave, courageous, unbelievably smart (and sometimes not so much), fascinating, funny, generous, selfish, predictable (and sometimes unpredictable), and altogether beloved children of God – Every. Single. One. So an essential part of life is continuing to increase the size and scope of the tools in our boxes and sheds and garages and out buildings and warehouses and arenas and maybe even churches. And then we have the possibility of using those expanding tools of faith and relationship, and justice and compassion, and courage and kindness, and listening-to-understand, tools to both build and oftentimes repair our relationships and interactions with one another. The question is, do we want to, you know, really? Or would we rather simply quiet the screech and duct tape the bumper and feel good that we did that much?

My duct tape and WD-40 are pretty handy, but I also think I’ll keep track of that a-little-too-heavy red toolbox in my garage. Those trips my dad has made to Home Depot with the intriguing tool treasures he’s brought home over the years of my DIY projects awaiting his visits might be useful for me to learn to use as well.