So mud-jacking, now there’s an interesting if not random-until-you-need-it idea. A nice bug salesman came to my front door one Sunday afternoon to see if I had any need for services guaranteed to keep spiders and other crawly things from sharing my living space. I gently told him that all the animals in my home are ones that I want to keep but as he walked away, I noticed a rather sizeable crack at the bottom of the steps off my front porch. I followed it around to the side of the step and porch, and there was a big hole that I could put my hand in as far as it would go underneath my porch steps. Yes, that is evidently what some pastors do with their Sunday afternoons, they lay on their stomachs on the ground beside their front porch and reach their arm in as far as it will go underneath their porch. What do YOU do on a Sunday afternoon?!? So it’s called a vacuum from what I now understand, and not the new red and white one specifically created to suck up pet hair kind. It’s an empty space that is not supposed to be empty which initially wasn’t empty until the dirt around the house “settled” and the rebar stayed where it was and the concrete couldn’t handle the pressure of the rebar staying and the ground leaving so it cracked and began to break apart.

The nice mud-jacker guy came out the next week with a handy-dandy line and scope and he could run it all the way under my front porch and across the front of my driveway. While it was intriguing to watch on his little sonar tv, that’s overall really not good if you’re the homeowner. All my concrete across the front of my house needed mud-jacked because it was depressed and cracking under the pressure.

O.k., so I’m a pastor and all of life is a potential sermon illustration. I say to the nice mud-jacker guy, “this is kind of like our world today, you know? Like we’re all experiencing this pressure around our differences: race, gender, economic class, sexuality. Our love for our united and free republic, our nation, is the rebar that is stable, but our differences are putting pressure on our foundation and we haven’t done the work we need to hear one another’s pain and fear and celebrations and joy and it’s created a vacuum in our relationships with each other and we’re beginning to crack and break apart!” Now is that a great illustration or what?!? *snort* The nice mud-jacker guy looks at me, looks at the porch and the driveway, scratches his head and says, “so um, are you wanting me to put you on the schedule to fix this? Because if you don’t you’ll end up having to replace it all and the average driveway of this size, let alone the porch, is about $10,000 to remove, do the excavation, and then replace.” I scheduled a mud-jacking party on his tablet and he left me contemplating the world and its foundations and vacuums and stability and pressures and fissures and cracks and the relatively high cost of waiting until everything breaks apart versus doing the work up front to prevent the consequences of needing total replacement.

It weighs pretty heavily on us I think, where we are as a people and what the consequences will be of the cracks we see that are already too well-developed between races and classes and genders and sexuality. We see those fissures clearly in our world, our nation, our community, and yes, in the churches and families that we love so dearly. Will violence solve the issues? I suppose, and it did cross my mind because I DO have a sledgehammer, I could have taken a sledgehammer and tried whacking the front of the porch step to try and force the crack to close, because if I could just make it look better on the outside then . . . I’m guessing the frustration of that solution might have caused more destruction than what was there initially. Violence will not solve our differences. Killing everyone who is different from us will not finally purify and bring peace to our world.

What do we do? I think we mud-jack. I think we recognize there’s a vacuum, a gaping hole in our inattention to recognizing and hearing the pain all around us from those whose lives are filled with struggle for more complex reasons than we’ve been willing to admit if “we’re” not one of “them.” And we make it a priority to pay attention, first and foremost, by listening. Listening before we give advice. Listening before we tell “them” what “they” need to do. Listening before we judge and evaluate why “they’ve brought this on themselves.” Listening before we take action on what we’ve decided will make things better for everyone else.

It’s difficult to hear another’s pain when that voice of pain speaks out of anger and bitterness and frustration and accusation and dejection and hopelessness and grief. It’s difficult to hear without trying too quickly to solve and give instruction and find some way to relieve ourselves of guilt we don’t completely feel or believe we deserve.

The thing about mud-jacking? It’s loud. The machine used to mix the slurry that they pump into the vacuum is loud. The tool used to drill holes through the concrete to push the slurry into the vacuum is loud. The two guys yelling at each other over the slurry machine and the concrete drill about who’s doing what in the process are loud. Sometimes I think the volume has to be pumped up to release some pressure before we can “settle” into effective conversations that bring disparate people and voices together to create compromise and begin together to figure out how to repair cracked and broken relationships. 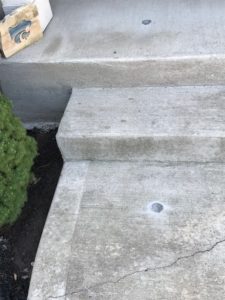 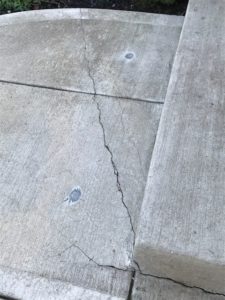 My driveway and porch have been mud-jacked, but it’s not perfect. The nice mud-jacker guy came by a few days after the process to check on things and I pointed out how some of the slurry had sunk into the holes they’d drilled and they weren’t level with the driveway. And how the front of the driveway still wasn’t quite even with the lip to the garage. And how the crack on my bottom step had certainly narrowed but it wasn’t completely closed. And he smiled and told me that once something is broken, it doesn’t go back to being what it was, but in some ways it’s stronger with the new slurry mix helping support the concrete alongside and around the rebar. Hmmmm. “Preach it brother,” I said. “Write me a check for my services,” he responded.

Do I blame the bug guy or thank the bug guy for waking me up on a random Sunday afternoon to the cracks in my concrete and the vacuum around the rebar in my foundation? Truthfully? Probably both. Ignorance is sometimes a bit blissful, AND being fully awake is the only way to experience the brutal beauty, the “brutiful” reality (thanks author Glennon Doyle) of an authentic life.