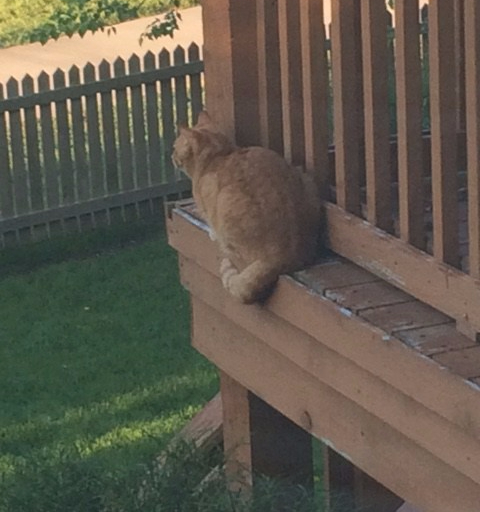 Living on the edge. That was the first thing I thought when I glanced outside a few mornings ago and saw Ringo, for reasons only a feline might know, crouched on the outside of the protective railing of my deck a full story up from ground level. The deck is perfectly safe, a nice size, has a table and chairs and umbrella for when the sun shines. Seemingly none of that is particularly appealing. Instead, what is appealing is carefully squeezing through the rails and perching perilously on the edge, because he can see the world better?

In sporting parlance, humans with similar predispositions are often called “adrenaline junkies” – athletes, both professional and amateur, who seek the thrills of pushing the limits of human endeavor and sometimes existence. Perhaps you have seen those suits that allow human beings to fly without a parachute, a hang-glider, or any other mechanical apparatus. I have dreams of being able to fly and soar, but no, putting on one of those suits and flinging myself off the side of a mountain does not appeal to me as a realization of that dream. I’m more hoping that may be a part of an eternal experience.

A friend once told me, when we were hanging out and talking about multiple possibilities of how faith communities and human beings walking the way of Jesus might be able to change the world, that there are levels of living on the edge. He says, “There’s living on the edge, living on the cutting edge, and living on the bleeding edge. The last one is the step too far from which you can’t always recover well.”

Hmmm, those are interesting nuances to what might seem a fairly general concept.

For me the bleeding edge, the step too far toward a dream, is believing I can put on a suit with a form of wings and fly the way I see myself in dreams. The bleeding edge is hearing the thunder and lightning of an approaching storm and deciding to continue to grab a metal stick to attempt to put a dimpled ball in a hole marked by a flag. That lightning might hit other people but certainly not me. Maybe de-nial ain’t just a river in Egypt, as wise-acre friends might say. The bleeding edge might be deciding we know what’s best for the world and, in order to fulfill that “best,” we decide forcing folks to follow our way with threat and violence is worth it for their ultimate best. The kind of world Jesus was living in during the Pax Romana, perhaps. We all want peace, but using tools like crucifixion to “force or enforce” that peace seems a bit oxy-moronic.

What about the cutting edge? Is the cutting edge a willingness to attempt those impossibilities defined by the general population, in order to make steps forward that otherwise we might never make? Wilbur and Orville Wright deciding they could get a machine with an engine and wings off the ground and working until they did? Abraham Lincoln not giving up on a political career after multiple defeats at multiple levels and yet ending up in the right place at the right time to move this country toward a lasting union, the essence of which fulfilled a living part of our preamble to the constitution: “We hold these truths to be self-evident that all persons (sic. men) are created equal, that they are endowed, by their creator, with certain unalienable rights. That among these are life, liberty, and the pursuit of happiness.” (Thanks Miss Sebelius, my Senior class Government teacher, for making us memorize the preamble. I can still recite it on command. Her pedagogy was a bit built on fear, but I guess it worked! Public school education right here!) Is the cutting edge a local church struggling mightily with what to do about a building in a downtown area that wouldn’t sell when it was supposed to, after the congregation moved to a newly built, greatly in debt space 10 minutes away? Then somehow in the struggle (God) deciding to live into the possibility of a Mission Center? The cutting edge doesn’t always lead to “successful” results, but perhaps the results aren’t always the greatest value.

What about simply living on the edge? Not cutting or bleeding, but just the “edge”. What does that mean for us in this day and time? Perhaps it means believing there is still a way forward in the midst of deep divisions. Perhaps it means remaining open and invitational to those whose perspectives and life choices are vastly different from ours. Perhaps it means trusting that God is in the midst of the most ugly and destructive situations we human beings create for ourselves and offering grace in the midst of all the places and consequences we find ourselves facing and through which we struggle to find meaning and purpose.

Honestly? I’m glad my dog Bud is way too big to fit through the spindles on the deck to perch on the outside to see the world from a fresh perspective. I’m glad Ringo’s bro Oscar has decided the world outside the house is just waaaay too big so “living on the edge” for him is perching safely on the window-sill and yelling at the birds that dare fly past. And then there’s Ringo – the cat who believes that sometimes a mostly dead snake is a great gift, that cat-er-wawls so loudly that above my concerns, I let him out to release his inner lion into the world, and who will most likely continue to perch precariously just outside the limits of my version of safety and in so doing, be who he is created to be.

Wherever and whatever our level of “edge” is, living into who we are created to be as individuals, as communities, maybe even as denominations, our trust in a creative power who wants good things for us is the power that draws us together and is that which will lead us forward.