Marian Wright Edelman, in her essay “Standing Up for Children” included in the book The Impossible Will Take a Little While by Paul Rogat Loeb, starts with this:

Dr. Benjamin Mays, president of Morehouse College and mentor to Dr. Martin Luther King, Jr., and thousands of other Black youths, including me, once said: ‘The tragedy of life doesn’t lie in not reaching your goal. The tragedy lies in having no goal to reach. It isn’t a calamity to die with dreams unfilled, but it is a calamity not to dream. It is not a disgrace not to reach the stars, but it is a disgrace to have no stars to reach for. Not failure, but low aim, is a sin.’

I. Love. That. I love that as we start into the Advent season – these days and weeks we prepare for Christmas Eve and Christmas Day. What was Jesus all about anyway… we make such a big deal about putting up trees, and hanging lights, and placing garlands with just the right amount of “planned for” naturalness. We make lists, prepare food, purchase presents, wrap them (if they won’t do it for free at the store), attend parties, host parties, attend concerts, maybe take in the Nutcracker at the Midland, or Dickens’ A Christmas Carol at the Missouri Rep. Maybe it’s ice skating at Crown Center or taking the family to the Plaza to view the lights.

Marian Wright Edelman goes on in the same essay to say this:

Edmond McDonald wrote that when God wants an important thing done in this world or a wrong righted, He goes about it in a very singular way. He doesn’t release thunderbolts or stir up earthquakes. God simply has a tiny baby born, perhaps of a very humble home, perhaps of a very humble mother. And she puts it in the baby’s mind, and then – God waits. The great events of this world are not battles and elections and earthquakes and thunderbolts. The great events are babies, for each child comes with the message that God is not yet discouraged with humanity, but is still expecting goodwill to become incarnate in each human life. And so God produced a Gandhi and a Mandela and a Harriet Tubman, and Eleanor Roosevelt and a Martin Luther King, Jr., and each of us to guide the earth towards peace rather than conflict.

So I went out west for ThanksChristmas last week.

When you have a pastor in the family with whom you’ve had to deal for so many years and they seem to be booked on Christmas Eve, and once they turned 50 became too exhausted and cranky to drive west on Christmas Day, you get creative about the holy-days. So for the past several years, I head west in late November and we have ThanksChristmas. My favorite youngest nephew and niece-in-law, (yes, I have a favorite oldest nephew and niece-in-law as well – please don’t tell any of them they’re my favorites) or Santa’s elves as I like to call them, who drew my name from the family Christmas lottery hat, got me the best and warmest blanket ever, and… a mini-DRONE!!!

I know, right??!!?? Me. A MINI-DRONE! Trees, walls, roofs, unsuspecting animals and small children, AND, I have the controls. I wonder, would the Celebration Center not be THE BEST place for me to practice mini-drone flying? I mean as long as I stay away from the Chancel area up front and the sound system in the back, there’s not much I could injure or break. I’m sure it says somewhere in the Bible that Jesus would love for pastors to play with their toys in the sanctuary to experience the real meaning of Christmas. Hmmmmm. *snort* Maybe not so much… but maybe a children’s sermon illustration at some point…

Why has it given me such entertainment? And I’ll confess, don’t tell Avery and Jessie, I haven’t even gotten it out of the box yet, or even broken the seal – it makes me happy just looking at it, seriously! Okay, yes, I’m a bit quirkier than most, and probably a bit more introverted than anyone realizes. So why has it given me such entertainment when I haven’t even played with it yet? It’s just that – it’s about the creativity of play – and it’s about an old aunt and a much younger nephew and niece-in-law, and the possibility and recognition that as serious as being an adult is, we all still have it in us to create, connect with each other at a heart level, and play.

Maybe Advent is about preparing our hearts to connect with dreams and stars and a God who came to earth as a baby to shake up our all-too-easily-accepted if not unspoken belief that what we produce and earn and succeed in and feel entitled to is not what the authentic meaning of life is really about. And maybe being reminded that God is not altogether discouraged with us yet will allow us the freedom and courage to believe in our own creative and sometimes playful abilities to work together “towards peace, rather than conflict.”

If a 112 pound big black rescue dog and a Ringo-come-lately to the party orange tabby cat can be thrown together in a life with a not-home-very-much pastor and become best (if not fairly odd) friends, maybe a baby coming to earth over 2,000 years ago can still help us dream of bright stars, deep peace, and beloved community… in Grace, and beyond. 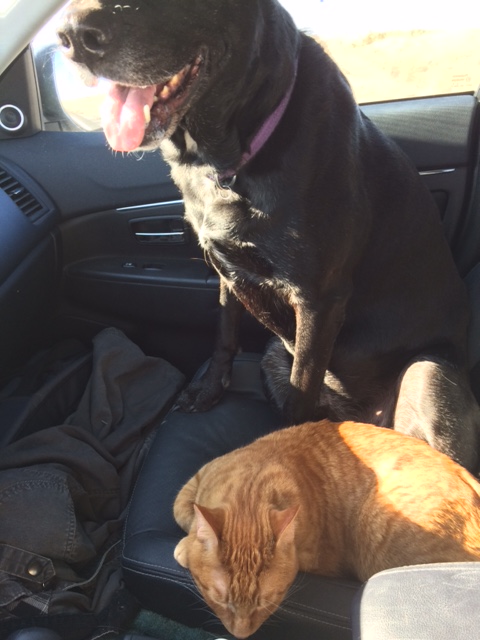 They both called shotgun on the way home… Guess who finally won?